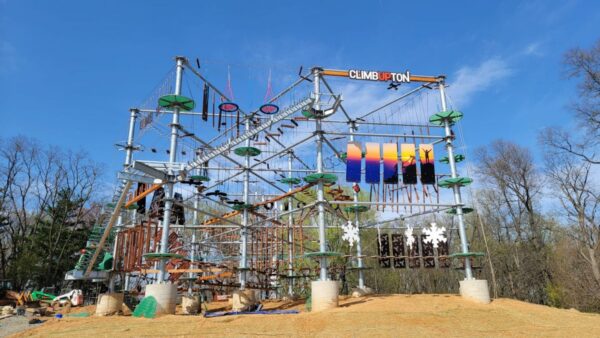 A new ropes course facility is set to open at Upton Hill Regional Park sometime in June, amid an expected spike in park visitor activity.

“It’s going to be the biggest and the best in the mid-Atlantic region,” said Paul Gilbert, the executive director of NOVA Parks, of the new ropes course. NOVA Parks runs Upton Hill, which is located at 6060 Wilson Blvd near Seven Corners.

Climb UPton will have 90 different elements on three different levels, including zip lines and a 50-foot drop. It will be open to those who are 49 inches or taller.

Construction on the course is largely complete but work, subject to changing weather, continues on an administrative building, Gilbert said. Once more work is complete, NOVA Parks will set a user fee and pick an opening date, which the executive director expects will be in mid- to late- June.

As for COVID-19 safety, Gilbert said social distancing is built into the course and equipment will be sanitized between uses.

“The outdoors is your biggest safety feature,” he said.

This new facility will open as NOVA Parks expects an increase in visitors to all its facilities this summer. Gilbert said he expects pools and waterparks — all of which will open Memorial Day — to drive the increase, as they were closed last summer.

“This summer, people are going to be interested in returning to normalcy,” said Gilbert, who is also George Mason University’s Executive-in-Residence for the College of Education and Human Development’s Recreation Management Program.

Adhering to Virginia guidelines for aquatic facilities, Upton Hill’s pool will operate at 75% capacity, and an annual pass will not guarantee admission if capacity has already been reached, according to the park’s Facebook page.

The organization is currently not selling new annual passes due to these restrictions.

For its beach-themed Ocean Dunes Waterpark, Upton Hill is “hiring and preparing the waterpark for Memorial Day weekend opening,” another Facebook post said.

NOVA Parks is continuing to hire new summer staff for all its facilities to meet the surge in visitors, as capacity restrictions are set to perhaps end by June 15, Gilbert said.

But even with the restrictions, reopening the pools and waterparks could be a boon for the regional parks authority, which took an estimated $5 million hit in user fees in part because aquatic facilities were closed, according to its current budget.

“Over the pandemic, people were already exploring the outdoors in new ways, because so many other things weren’t available,” Gilbert said. “We saw unprecedented use of hiking and biking trails. Now that people have discovered or rediscovered how fun the outdoors can be, I anticipate they will continue to gravitate to parks.”

Trail use increased by four to five times, he said. People also gravitated toward another activity that had been declining in popularity over the years: golf, which is up 30% from pre-pandemic times, he said.

NOVA Parks also leaned on other activities with social distancing potential, such as shooting, boating and swinging baseball bats.

“I think all of those trends are going to continue for some time,” Gilbert said. “People have been reintroduced to outdoor recreation.”