(Updated at 10:35 a.m.) Arlington residents woke up this morning to another day of gasoline shortages and lines at gas stations.

While the Colonial Pipeline has been restarted after last week’s cyberattack, it could take days for gasoline supplies along the East Coast and in the Southeast to return to normal, the pipeline company says. In the meantime, trying to fill up in Arlington requires patience.

Last night most if not all Arlington gas stations were out of gas, according to GasBuddy. Even the military gas station at Fort Myer was running low or out. At one BP station that still had gas yesterday evening, Arlington County deployed mobile signboard crews to close a lane of traffic along Lee Highway due to the long line.

Across Virginia this morning, GasBuddy reported that 55% of stations were without gas. The Commonwealth is still in a state of emergency as a result of the pipeline disruption.

In a quick survey of some parts of Arlington this morning, ARLnow saw some stations that were out of gas, while others were back in operation — with lines of drivers hoping to fill their tank.

Among the stations still awaiting a refill this morning was the Shell station near the corner of N. Glebe Road and Lee Highway. While the Exxon station across the street had gas — and a long line — the Shell station had handwritten “out of gas” signs on the pumps. One thing it did have: a CNN crew broadcasting reports for TV stations across the country.

As if the shortages weren’t bad enough, a car caught fire at one local gas station this morning. Initial reports suggest that a Volvo caught fire at the Liberty gas station at the corner of Columbia Pike and S. George Mason Drive shortly before 10:30 a.m. Damage to the building was reported, but there were no reports of injuries. Police helped to direct traffic while Arlington County firefighters extinguished the flames. 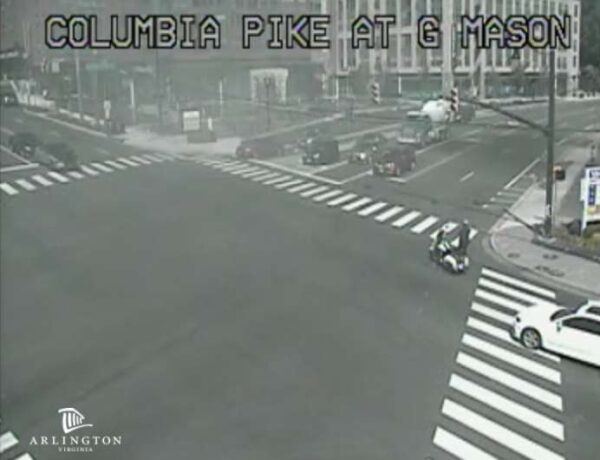 Colonial Pipeline, meanwhile, says it should be back supplying fuels across its system by midday today, raising hopes of a relatively swift return to normal at the pumps.

COLONIAL: “By mid-day today, we project that each market we service will be receiving product from our system.”#ColonialPipeline