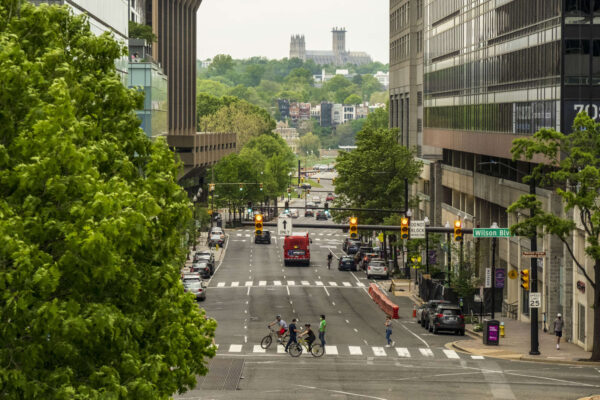 Proposed HQ2 ‘Helix’ Tower Is Too Tall — “Amazon.com Inc. may need to lop off the tip of its proposed drill-bit-like structure, the Helix, at its PenPlace development to ensure the safety of flights coming into and out of Reagan National Airport. Engineers working for the Metropolitan Washington Airports Authority determined the 15-story building is roughly 13 feet taller than the maximum allowable height for structures that close to the airport.” [Washington Business Journal, WJLA]

Homeless Population Down This Year — “The number of individuals counted as homeless across Arlington [this year] was down 14 percent from 2020 and declined by 26 percent since 2017, according to new figures from the Metropolitan Washington Council of Governments (COG). A total of 171 individuals were counted as homeless – either in shelters or living on the street – in the annual ‘Point in Time’ survey.” [Sun Gazette]

Update on Arlington Policing Practices — “Our Police Department has created an internal workgroup to review current policies and ensure they are aligned with best practices. Although excessive use of force has never been tolerated and our officers have been providing emergency medical treatment for years, additional language was added to our Use of Force policy to formalize current practices.” [Arlington County]

Arlington Man Has Big TikTok Following — “Tri Phan of Arlington, Virginia, has amassed 1.5 million followers since he began posting workout and healthy cooking videos in November. The 23-year-old, who is working on his master’s degree in data and business analytics at American University, often does two versions of his content, one in English and one in Vietnamese; about 60 percent of his followers are Vietnamese, he says.” [Associated Press]

Vets to Hike to Arlington from Connecticut — “On Tuesday, June 1, Will Reese will set out on “Ruck to Remember (R2R) – a 380-mile trek from Avon, CT, to Arlington, VA, to raise awareness and funds for APK Charities. Reese, who launched R2R in 2019, this time will be joined by hundreds of active and retired Military from all around the world who will all don “ruck-sacks” – military backpacks – for the 7-day march, which will culminate on Tuesday, June 8.” [We-ha.com]

Soon: No Tour Bus Parking at AF Memorial — “The removal of motorcoach parking at the entrance to the Air Force Memorial will present mobility issues, she said. “‘It will ultimately limit the number of people visiting the memorial,’ added [Guild of Professional Tour Guides] colleague Maribeth Oakes. Walking from the main cemetery entrance to the Air Force Memorial is a round trip of three miles and the trams, which cost $15 for adults, can fill up before the group of 58 could board. The guild would like a southern expansion with short-term parking for motorcoaches.” [Falls Church News-Press]