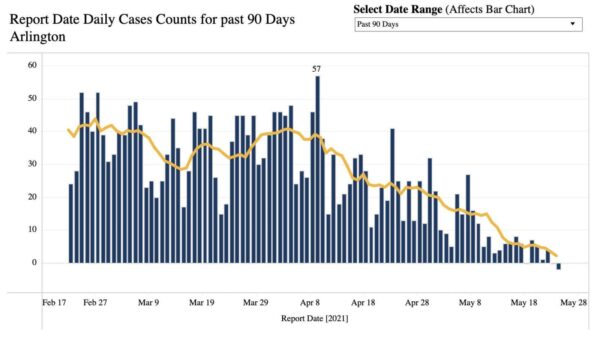 The rate of new coronavirus cases in Arlington has continued to drop to levels almost unimaginable just a few months ago.

As of Monday morning, a net 15 cases have been reported over the past seven days, or just over two per day. That’s the lowest weekly total since March 19, 2020, when testing was hard to come by and cases were likely severely undercounted.

The trailing seven-day case total in Arlington peaked with 864 cases on Jan. 12, by contrast.

The dramatic drop in cases comes as vaccinations in Arlington continue at a brisk pace.

More than two-thirds of those eligible for the vaccine — ages 12+ — have received at least one dose, according to Arlington County.

The vaccination effort is being credited for a corresponding drop in cases across the United States. Nationally, the rate of new cases has reached a nearly one-year low.

Despite the drop in cases, Covid-related hospitalizations are still being reported locally. There have been seven hospitalizations in Arlington over the past seven days, per Virginia Dept. of Health data. The virus has claimed a total of 256 lives to date in Arlington.