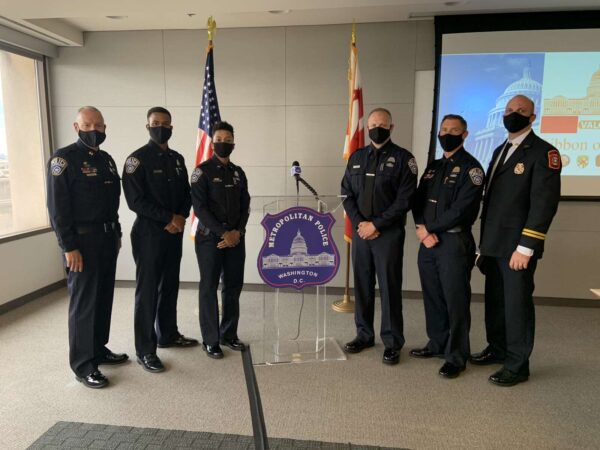 Sixty-five Arlington County police officers and firefighters have been recognized for their help defending the U.S. Capitol when a pro-Trump mob stormed it on Jan. 6.

The honor was announced in a tweet posted Monday by the Arlington County Police Department.

.@DCPoliceDept recently presented members of ACPD, @ArlingtonVaFD and other local police departments with a Ribbon of Valor, recognizing their assistance during the January 6th insurrection at the U.S. Capitol. pic.twitter.com/OZKQAOyVqK

“On May 11, [five] members of ACPD accepted the Ribbon of Valor on behalf of the ACPD officers who responded to the U.S. Capitol on January 6, 2021 and assisted Metropolitan Police Department under a mutual aid agreement,” ACPD spokeswoman Ashley Savage tells ARLnow. “The ribbons were distributed to those officers last week.”

Similar honors were provided to other local law enforcement agencies, including Prince George’s County Police Department and the Montgomery County Department of Police.

A video taken on the day of the insurrection shows ACPD officers in riot gear defending the U.S. Capitol alongside Virginia State Police and D.C. Metropolitan Police, keeping an agitated crowd at bay.

Not pictured was fire department spokesman Taylor Blunt, who said he also received the award on behalf of ACFD. Blunt and Waterfall were the only paramedics present on the Capitol steps during the riot, treating and triaging injured law enforcement officers and attackers alike, the Associated Press reported, citing documents obtained via the Freedom of Information Act.

Two firefighters loaned to Washington for the day were the only medics on the Capitol steps Jan. 6, trying to triage injured officers as they watched the angry mob swell and attack police working to protect Congress.

Law enforcement agents were “being pulled into the crowd and trampled, assaulted with scaffolding materials, and/or bear maced by protesters,” wrote Arlington County firefighter Taylor Blunt in an after-action memo. Some couldn’t walk, and had to be dragged to safety.

Even the attackers sought medical help, and Blunt and his colleague Nathan Waterfall treated those who were passing out or had been hit. But some “feigned illness to remain behind police lines,” Blunt wrote.

Other specific heroics of Arlington public safety personnel have yet to be revealed. Savage said “there are no additional details to provide at this time” because the events of the day remain an active FBI investigation.