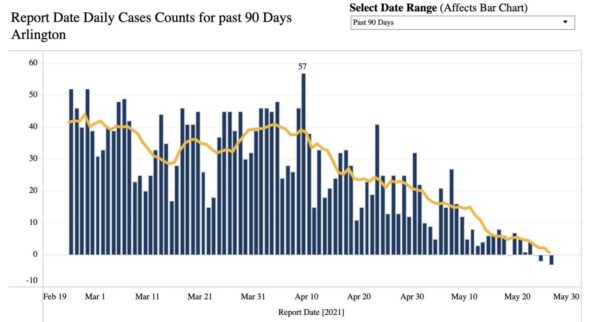 Arlington hasn’t just seen a drop in new coronavirus cases, it has seen its cumulative number of cases go backwards over the past few days.

On Friday, the Virginia Dept. of Health reported a total of 15,285 cases in Arlington over the course of the pandemic. Today, that same figure was 15,284, for a net negative number of new cases over that time span, according to VDH data.

So what’s going on?

“This is a routine part of data cleanup in cases that were deemed probable, but ended up not being a confirmed case,” explained Arlington County spokeswoman Jessica Baxter. “These cases are subtracted in the data.”

A net of only five new cases have been reported in Arlington over the past seven days — the lowest point since March 15, 2020, at the very outset of the pandemic.

The last time a positive total of new daily cases was reported was this past Saturday, May 22. Since then, the daily case totals have been 0, -2, 0 and -3. But that doesn’t tell the whole story: there are, in fact, new cases being reported.

“There have been 10 new cases reported since May 22,” Baxter confirmed this afternoon. That suggests that the actual seven-day rate of new cases is still relatively low but higher than reported: 20.

That is still a fraction of what the case rate in January, when more than 850 cases were reported over the course of just one week. Behind the dramatic drop: a dramatic rise in vaccinations.

As of this past weekend 63% of Arlington residents ages 12+ had received at least one vaccine dose, according to the county, which has a 70% vaccination goal.

The local vaccine counts from the state health department exclude those administered by federal agencies like the Dept. of Defense, which means that an even higher percentage of Arlington’s population is vaccinated than is being reported by VDH. 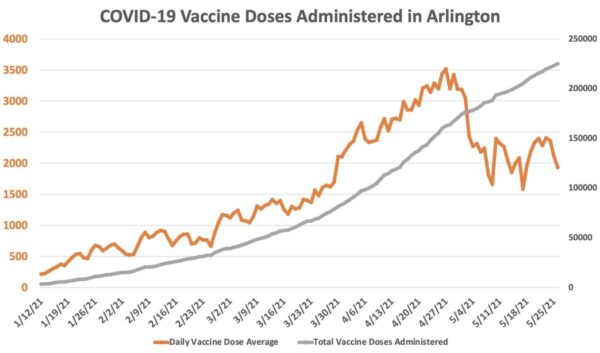 Update at 1:35 p.m. on 5/27/21 — Arlington’s trailing seven-day case total has now gone negative (-2), after another day of past probable cases being removed from the data.

UPDATE: The trailing seven-day total of Covid cases in Arlington is now negative. This is due to past “probable” cases being removed from the state health dept. numbers, according to an Arlington County spokeswoman. https://t.co/wIBaBpofEY pic.twitter.com/RMl9Tjm3J8