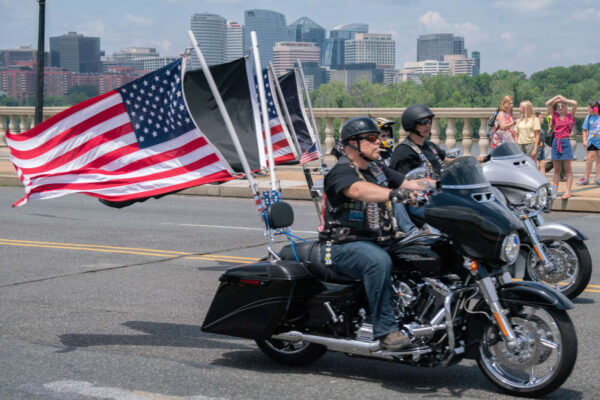 It’s not just the cicadas that are going to be making lots of noise this weekend. Thousands upon thousands of bikers are also expected to descend on the area for the successor to Rolling Thunder.

“Rolling to Remember” is the new name for the annual Memorial Day weekend motorcycle rally in the nation’s capital. It is expected to draw some 150,000 attendees, riding some 100,000 motorcycles, organizers told WTOP.

Much like past Rolling Thunder events — which utilized the Crystal City Hilton as the rally’s official headquarters — Rolling to Remember is also expected to result in large, motorcycle-riding crowds in Arlington. Among the accommodations suggested by organizers are hotels in Crystal City, Pentagon City and Rosslyn.

One of the two Saturday gatherings expected to be “attended heavily by those in town for Rolling to Remember” is an “Observation of Memorial Day Weekend” at the Crystal City Sports Pub on 23rd Street S. Arlington’s tourism office, meanwhile, has a web page devoted to the “massive” event.

The Arlington County Police Department is preparing for crowds.

“A variable message board has been placed on S. Clark Street at 23rd [Street] and will be used in the event there is traffic congestion in the area,” police spokeswoman Ashley Savage tells ARLnow. “ACPD will monitor and provide traffic control, if needed.”

Most of the rally’s official events are taking place in D.C. The RFK Stadium parking lot is being used as a rallying point, after the Pentagon denied organizers a permit this year, citing the pandemic. Numerous street closures are planned in the District.

In its past Rolling Thunder iteration, the annual rally had supporters and detractors among the local populace. About 30% of those who answered an ARLnow poll in 2017 said noise from all the motorcycles bothered them. The roar of engines is particularly pronounced around highways like I-395 and I-66.

Rolling to Remember is organized by the group AMVETS and is dedicated to “continued advocacy for our missing in action and the veteran suicide crisis.”