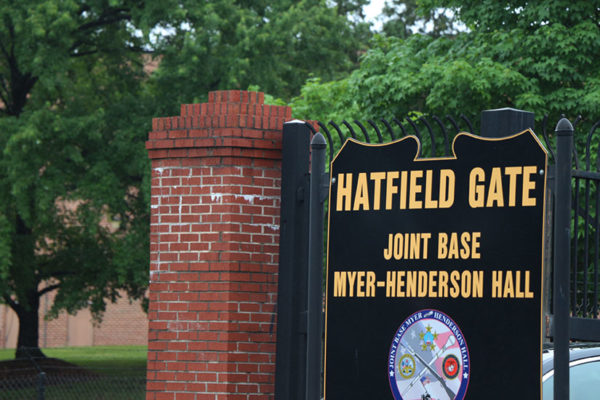 (Updated at 4 p.m.) Portions of Joint Base Myer-Henderson Hall were closed this afternoon after a suspicious package at one of the gates.

A witness described seeing a “large law enforcement response inside the base with crime scene tape and everything blocked off within a few hundred yards” of the Hatfield Gate, near the intersection of 2nd Street S. and Washington Blvd.

Around 2:30 p.m., a spokeswoman confirmed to ARLnow an “active situation” at the base.

“Hatfield Gate, the main gate at Joint Base Myer-Henderson Hall accessed of Washington Blvd., is closed at this time due to an incident at the gate,” said JBMHH Community Relations Officer Leah Rubalcaba. “Details of the incident are not in as it is an active situation. In the interim, traffic to the base is being diverted to Wright Gate and the Henderson Hall Gate.”

Via social media, the base announced that its medical clinic and exchange store, along with some roads, had been closed. ARLnow also hears that the child care center on the base was evacuated.

“There was a suspicious package detected at the gate,” Rubalcaba said. “It was checked out and we just received the ‘all clear’ a few minutes ago. Hatfield Gate has re-opened and operations are back to normal.”