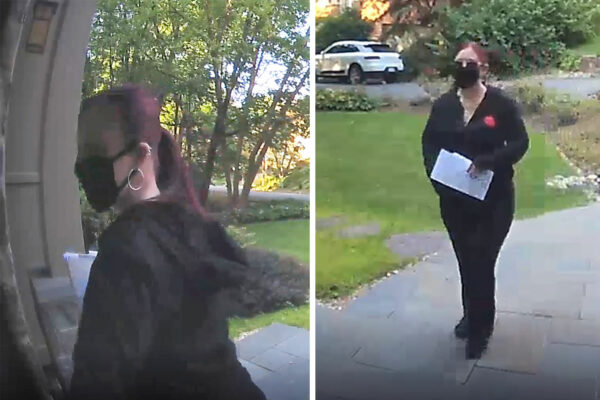 A woman used a fraudulent cashier’s check to steal a vehicle from an Arlington resident who was offering it for sale, according to police.

A woman who identified herself as “Stacy James” showed up at a home with the fake check in hand earlier this month, ostensibly to buy a used vehicle that was listed on Facebook Marketplace, police say. Five days later, the victim was notified by her bank that the check was fraudulent.

Police are now asking for the public’s help in identifying the alleged fraudster, who was wearing sunglasses and a mask but who had distinctive piercings in one ear.

The Arlington County Police Department’s Criminal Investigations Division is investigating a larceny from false pretenses and is seeking the public’s assistance identifying the suspect captured in home surveillances images.

On June 11, the victim filed an online police report regarding a fraud. The investigation determined the victim was selling a used car on Facebook Marketplace when the suspect, who identified herself as ‘Stacy James,’ made contact with him. On June 5, the suspect arrived at the victim’s home, inspected the vehicle and provided the victim with what appeared to be a cashier’s check for the purchase. On June 10, the victim was notified by their bank that the check was fraudulent.

The suspect is described as a white female, approximately 5’2″ tall and weighing 155 lbs. She has long, red/purple hair and multiple piercings on her left ear.

Anyone with information related to this incident and/or the suspect’s identity is asked to contact Detective L. Bello at 703-228-4166 or [email protected] Information may also be reported anonymously through the Arlington County Crime Solvers hotline at 1-866-411-TIPS (8477).