What’s Next with Nicole is a biweekly opinion column. The views expressed are solely the author’s.

It is my hope that Amazon will commit a significant portion of their $2 billion Housing Equity Fund to households that are low income or have an income that is under 50% area median income (AMI).

If a fund is being created and advertised as creating affordable housing it should do that, instead of primarily providing average market rate rental housing. Amazon’s recent commitment at Crystal House was primarily for those making 60-80% AMI. That is a housing supply that we have in abundance (see image 1). Additionally, this is middle class housing, not affordable housing.

For renters in the 60-80% income bracket participating in the affordable housing program, there is a maximum rent allowed of $1,935. That is higher than our natural market rate average rent of $1,908 for a 1 bedroom apartment in Arlington (see image 2). If funds continue to be invested in housing development that primarily produce 60-80% AMI units, it would be inaccurate to qualify their investment as a philanthropic community benefit, as it is higher than the market average.

Our community is lacking in both <30% AMI rental units and 30-49% AMI units, compared to the population that exists in those income brackets (see image 1). 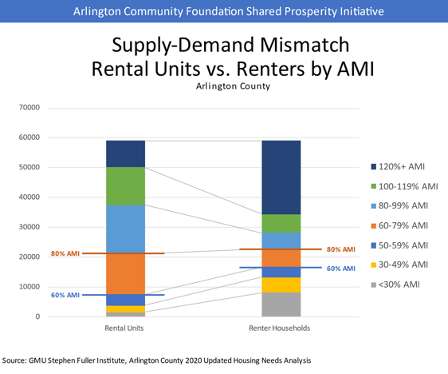 In Amazon’s press release, their stated goal was for the Fund to support their commitment to affordable housing and to ensure moderate to low-income families can afford housing in the communities that they operate. While their commitment to moderate income housing in Crystal House and other local investments is appreciated, it is necessary to provide investment towards low-income populations in their next round of distributed funds.

If Amazon is to fully commit to providing affordable housing, they should do so for the population most in need — those making under 50% AMI. If the Housing Equity Fund does not increase focus towards their stated commitment to low-income families, this should be viewed as failing to achieve their goal.

Nicole Merlene grew up in Arlington County and has been a civic leader in both policy and political arenas. She has been an Economic Development and Tenant-Landlord Commissioner; Community Development Citizens Advisory Committee, Pentagon City Planning Study, Rosslyn Transportation Study, and Vision Zero member; Arlington County Civic Federation and Rosslyn Civic Association Board Member. In 2019 she sought the Democratic nomination for the 31st District of the Virginia State Senate. Professionally Nicole is an Economic Development Specialist where she works to attract businesses to the region. She lives in an apartment with her dog Riley and enjoys running and painting.