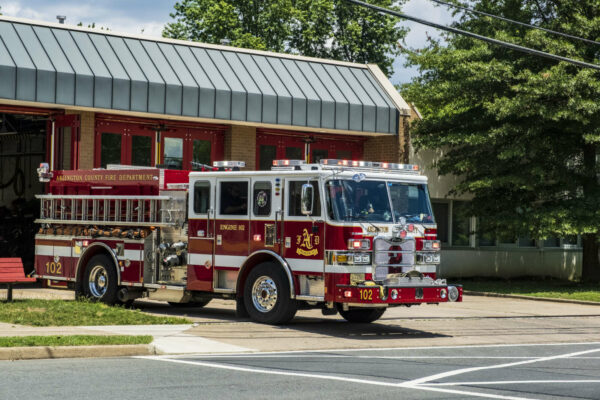 Wearing a clock as a necklace for turning papers in late. Carrying a hose stuffed with sand and rocks for losing a flag.

These were two “alternative learning opportunities” or ALOs that one instructor in Arlington County Fire Department’s Training Academy allegedly prescribed to former firefighter EMT recruit Brett Ahern in one week for mistakes that he made.

Two months ago, Ahern cited these ALOs as examples of how he was unfairly targeted by the instructor and set up to fail, according to an exclusive report by Hagerstown TV station WDVM. He told the news outlet that the way he was treated during the academy last year made him anxious and unfocused. Even after an investigation, he said the hazing continued until he failed two tests and was dismissed.

A 54-page Human Resources report, shared with ARLnow, indicates that the fire department investigated Ahern’s claims last summer. The heavily redacted report identified firefighters and recruits who observed that Ahern specifically was yelled at, taunted and tasked with ALOs that no other recruit was given. It also found that five other recruits were occasional targets of the same instructor.

ACFD told WDVM and repeated to ARLnow that it is committed to making changes to each subsequent class recruit class. At least one change has been made since Ahern — part of the 78th class — failed out of the academy. Recruit Class 79, which graduated in May, did not have alternative learning opportunities, according to Lt. Nate Hiner, the spokesman for the department.

“The Arlington County Fire Department makes improvements each Recruit Class, building off lessons learned from previous classes,” Hiner said. “The ACFD has discontinued the use of ALO’s, ensuring that any supplemental training focuses solely on refinement and reinforcement of proper skills, techniques, and procedures that recruits will utilize as firefighter/EMT’s protecting the community.”

Previously, Fire Chief David Povlitz told WDVM that if a recruit made a mistake during training, an instructor would make time for these so-called ALOs, which are “meant to reinforce learning and they have to be approved by high-ranking officers.”

But according to the newly-shared HR report, multiple witnesses who were interviewed during the investigation said that the two ALOs that Ahern was given during his “Hell Week” — wearing the clock and carrying the heavy hose — were beyond the pale.

One recruit said the hose in particular — punishment for losing a flag, or guidon — was “straight up bullying.”

“When [recruits] lost the guidon before, they were given the ‘ghetto guidon,'” one interviewee said, “but when Recruit Ahern lost the guidon, he was given” this heavy hose, which the speaker called “an impossible guidon.”

The report said other interviewees “opined that this ALO, although warranted, was orchestrated by [the instructor] to ‘break’ Recruit Ahern.” They added that “the ALO would have been handled differently had it been assigned to another recruit.”

Aside from these ALOs, multiple independent witnesses said the instructor was vocal about his belief that Ahern did not deserve to be in the academy, and that he would yell — or at least would raise his voice — at Ahern in front of his peers.

Five witnesses confirmed that the instructor had Ahern accompany another recruit who asked to retrieve his sunglasses. On their return, the instructor said the recruits were two minutes late and the class had covered “a lot of material.” He told the recruits that he hoped their next test would cover this missed information, adding, “I hope you f— fail it!”

Witnesses said the instructor did not give them an amount of time to retrieve the sunglasses or a specific time to return.

“It was evident that he was setting them up for failure,” one witness said.

Multiple interviewees overheard the instructor accusing Ahern of being “a liar, nothing but a liar” when he said he did not know the answer to a question. The instructor allegedly walked away when he saw a captain arrive.

Three said that during a drill, Ahern messed up and decided to stop and reset for the next repetition. The instructor called him a “quitter” and told him “to start looking for a job at Walmart.”

The instructor was interviewed on Aug. 4 about his conduct. He said he could not recall a time when he raised his voice, yelled or cursed in front of Ahern or another recruit, and he wanted Ahern “to finish strong and stay on his squad.” When asked to evaluate the truth of these statements, many recruits asserted that one or more were false.

According to WDVM, after the investigation ended the instructor was temporarily reassigned, but was soon back in the field. The station also reported the Ahern has filed a civil lawsuit against the fire department.

When asked what ACFD is doing to ensure that bullying behavior is not rewarded, Hiner said the county has mechanisms in place to prevent, report and investigate allegations of behavior that are not consistent with regulations, doctrines, policies and the law.

“The ACFD encourages those that have either witnessed or have been subjected to misconduct to come forward so that the matter may be investigated and properly addressed,” he said. “The ACFD honorably serves the community and strives for an inclusive and understanding work environment.”

One month after Recruit Class 79 graduated earlier this year, the 80th Recruit Class had its first day of training academy on June 21. They were initiated by a fire department lieutenant who challenged them to take the same picture on graduation day, with every recruit in the same spot.

“I asked the class last year, they said, ‘Yes, sir,’ and two days later, someone [was] gone,” he said in a video posted by ACFD. “Give this a chance.”

Lt Descalzo’s challenge to Recruit Class 80 on their first day of academy: To be able to take this same picture on graduation day and still have everyone who started finish #RC80. Give it a true chance and we will not let you down! #Leadership #Commitment #StartWith27FinishWith27 pic.twitter.com/T1TTdcIXh0