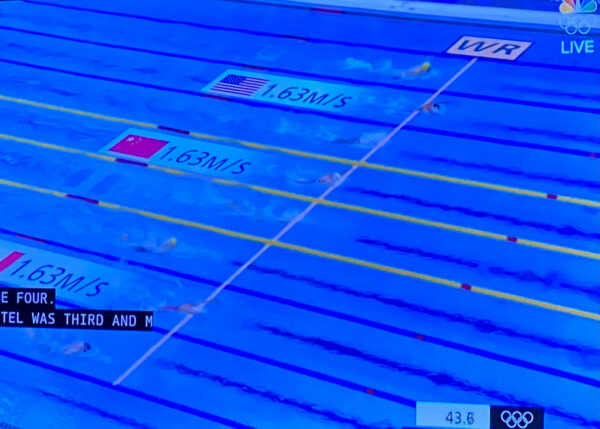 Yorktown High School grad Torri Huske appeared poised for victory in the 100-meter butterfly last night in Tokyo, but ended up just off the Olympic podium by a tiny fraction of a second.

The 18-year-old was out in front by a head down the stretch, but ended up finishing at 55.73 seconds, 0.01 seconds away from the bronze medal and just 0.14 seconds after the gold medal time.

Arlington Aquatic Club teammates and other supporters cheered Huske on from Dudley’s Sport and Ale in Shirlington, as seen on NBC’s Olympics Twitter account, below.

Despite the disappointment, Huske is still early in her competitive swimming career. She will attend Stanford in the fall, swimming on the school’s elite women’s team, and will be a favorite to return to the Olympics in three years in Paris.

Wow, what a race. Torri Huske misses the podium by .01 seconds! pic.twitter.com/BYgA14UeoR

Uggh so close for Huske to win a medal. 1/100th away from Bronze. Great race though! #Tokyo2020 #TeamUSA https://t.co/PmpawHmnrq

Torri Huske came JUST short of a medal at the #TokyoOlympics, but the support she had at home during her final is worthy of the GOLD. pic.twitter.com/jJMxDQ3mbz

Torri Huske will be back. She’s going to be a superstar in Paris 2024.