The Langston Boulevard Corridor (formerly Lee Highway) runs along the southern portion of Arlington’s most expensive and exclusive neighborhoods.

The lots are large, the homes cost a fortune and rental options are few. Arlington County is considering zoning changes along Langston Boulevard that would allow new types of housing, including duplexes, triplexes and small apartments that would be attainable as rental or ownership for moderate-income Arlingtonians.

If you want Arlington staff to take an important step forward by allowing transitional zoning, including missing middle housing, at the edges of the Langston Boulevard Corridor, let them know by August 3.

The Plan Lee Highway process is a revisioning of several neighborhoods surrounding the existing commercial nodes to create more walkable communities, increase the development opportunity, and form a new sense of place. The Plan Lee Highway Concept Plan will come out in the fall.

Langston Boulevard is an ideal place to showcase the benefits of Missing Middle housing. As Arlington’s northern-most arterial road, with regular bus service and a Metro station on each end, it can easily accommodate more residents while allowing people to drive less. To become a modern Main Street, new and existing businesses need more customers to live and shop near their homes. Duplex, triplexes and small multi-family dwellings will provide less expensive homeownership opportunities and more rental units in an area that is financially out of reach to most Arlingtonians.

Missing middle benefits all types of Arlington residents. Young families have more options for their starter home. Senior citizens can find something nearby when they want to downsize. Homeowners have more options if they want to redevelop their property. Gentle density makes our neighborhoods more vibrant, which supports more local businesses and nearby amenities and services. North Arlington has the least affordable housing in Arlington because it has the largest homes, the largest lots, and the fewest rentals. Let’s allow landowners to build the types of housing that fit existing market needs. 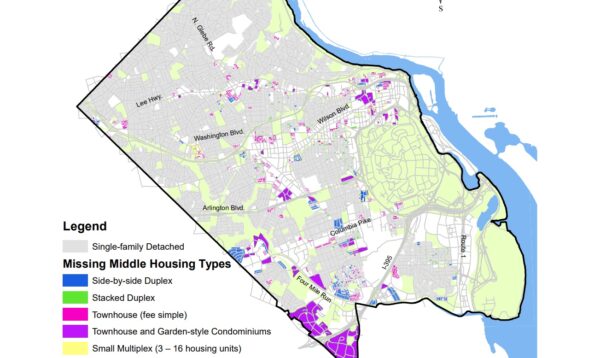 Langston Boulevard already has a smattering of small multi-family housing, some of which is now considered “nonconforming” because zoning laws became more restrictive after they were built. Changing the zoning will enhance the existing neighborhood character. Increased density around the East Falls Church Metro Station is especially important because the station has low ridership and was considered for closure by WMATA in a recent budget proposal. Putting more residents within walking distance of the Metro makes good use of this public asset.

Unfortunately, staff have received significant negative feedback from neighbors who are resistant to change. Positive comments about new housing options show our leaders that Arlington is full of people who are looking toward a future of Arlington that is inclusive and sustainable. That means allowing more people to live in opportunity-rich neighborhoods like those along Langston Boulevard.

The Arlington Way is designed to heighten the feedback of older, wealthier, and more established Arlington residents, not to achieve a representative sample of our community (which is 60% renters), or to highlight the perspective of those most in need. “Eternal vigilance is the price of low density,” County Board Member Leo Urbanske said in 1962 when he voted to dissuade “lower income people” from coming to the county by banning three-story walk-ups. Sixty years later, this attitude still holds sway in the county.

Those of us who embrace density, who want housing options for renters and non-millionaires, and who want a place for newcomers, people aging in place and everyone in between, need to show this same vigilance by sharing feedback with the County Board and staff at every opportunity. Please send your comments in favor of missing middle zoning along Langston Boulevard to [email protected] by August 3!

Jane Fiegen Green, an Arlington resident since 2015, proudly rents an apartment in Pentagon City with her family. By day, she is the Membership Director for Food and Water Watch, and by night she tries to navigate the Arlington Way. Opinions here are her own.