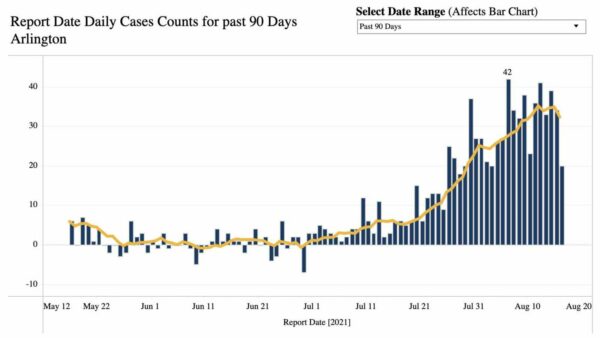 After a month of rising Covid cases, there are some signs that the growth in new cases appears to be slowing.

The seven-day moving average of new daily cases increased by only one over the past week — from 31 to 32 cases per day — the slowest weekly growth since the county’s coronavirus case count started rising one month ago, amid the nationwide surge of the virus’ delta variant.

It’s unclear whether the leveling off is a temporary blip or the start of a sustained trend, however. The United Kingdom, which saw its Covid cases start to rise in late May amid the delta wave, reached a peak in cases roughly two months later, though the rate of new cases remains elevated compared to that country’s spring lull.

Arlington County’s test positivity rate, meanwhile, has risen from 0.4% on July 1 to 3.7% on Thursday, according to Virginia Dept. of Health data. Over the previous five days, however, the rate only rose by 0.1%. 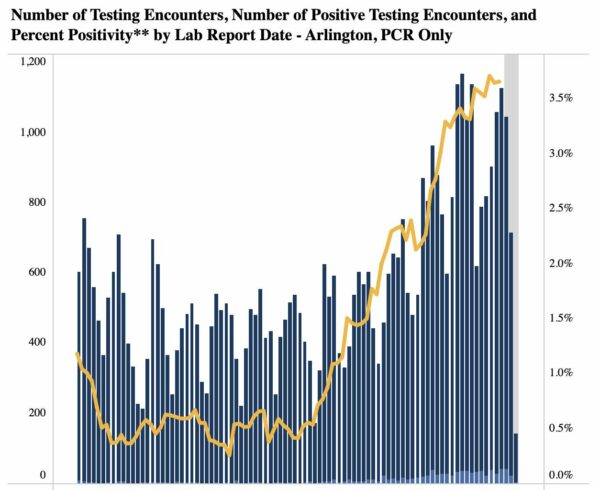 Over the past week, six Covid-related hospitalizations and one death have been reported. It’s the first reported Covid-related death in Arlington since the end of June, according to VDH data.

On Thursday the U.S. Food and Drug administration approved Covid vaccine boosters for some immunocompromised individuals. Arlington County said Sunday that it was not yet prepared to administer booster shots and recommended that those eligible for them go to a pharmacy instead.

There are reports that the Biden administration is working on a plan to allow the general population to receive booster shots in the fall, amid questions about the efficacy of the vaccines over time, particularly against the more contagious delta variant.