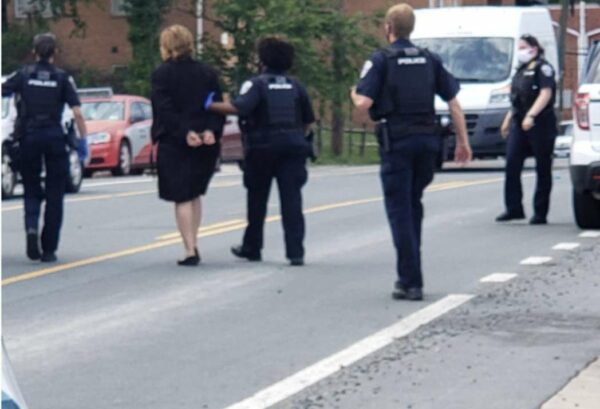 A now-former Arlington elections official is facing charges after police say she improperly removed someone from the voter roll.

Tyra Baker turned herself in on August 26, according to Arlington County police, after arrest warrants were issued in connection to an incident last fall involving Baker’s service in the elections office. She was released on bond but is due to be arraigned in court today (Thursday) on charges of voter intimidation, a misdemeanor, and election official corrupt conduct, a felony, according to court records.

A person with knowledge of the situation, who wished to remain anonymous, tells ARLnow that it started with a dispute over money at Baker’s family-run funeral home in Green Valley.

Baker managed the Chinn Baker Funeral Service on S. Shirlington Road, which was owned by her father until his death in 2018. Family members accused Baker of financial impropriety, leading to a physical confrontation last summer, the person said.

Baker was arrested after that alleged incident and charged with assault.

“At approximately 3:10 p.m. on June 27, 2020, police were dispatched to the 2600 block of Shirlington Road for the report of a domestic dispute,” said Arlington County Police Department spokeswoman Kirby Clark. “Tyra Baker, 51, of Arlington, Va., was arrested and charged with Domestic Assault and Battery. As the incident was domestic in nature, further details are protected under Virginia Code.”

Baker pleaded not guilty to the assault charge in Arlington General District Court. Her next court appearance in that case is set for May 2022, according to court records.

At the time of her arrest, Baker was still a part-time worker in the Arlington elections office.

Baker “worked as a seasonal Assistant Registrar since 2008,” Arlington Director of Elections Gretchen Reinemeyer said via a county spokeswoman, adding that she has also “served for several decades as an election officer on Election Day.”

The person familiar with the situation said the individual Baker is accused of subsequently removing from the voter roll was the assault victim. Police declined to confirm that, citing the need to “best protect the identity of the victim in each case.” The person removed from the roll only became aware of it after trying to vote in the pivotal fall 2020 general election.

“In October 2020, the victim attempted to vote in Arlington County, but was informed she was previously removed from the voter roll and unable to cast a ballot,” Clark tells ARLnow. “The victim subsequently filed an official complaint with the Arlington County Office of Elections. In December 2020, the Arlington County Police Department was contacted by Special Prosecutor Tony Kostelecky of the Prince William County Commonwealth Attorney’s Office regarding the case and began to investigate.”

“Follow-up investigation by detectives determined that the suspect was working as an Assistant Registrar in the Arlington County Office of Elections when she removed the known victim from the voter roll without proper authorization and without completing adequate documentation,” Clark continued. “Warrants were obtained for Tyra Baker, 51, of Arlington, Va., for § 24.2-607 Prohibited conduct; intimidation of voters; disturbance of election; how prevented; penalties and § 24.2-1001 Willful neglect or corrupt conduct. Baker turned herself in at the Office of the Magistrate on August 26, 2021, where she was served the warrants, and subsequently released on an unsecured bond.”

Reinemeyer described the incident as “isolated” but declined to provide specific information about the allegation. Generally, she said, voters who cannot cast a standard ballot at the polls are allowed to cast a provisional ballot pending further investigation.

“This was an isolated incident and not connected to any other fraud or instances of improper removal of voters,” Reinemeyer said last week. “There are safeguards in place to protect voters from improper removal such as a provisional ballot on Election Day. When a voter’s eligibility cannot be immediately determined, they are offered a provisional ballot. Each of these ballots are adjudicated after the election after a thorough review of records has been conducted.”

“Based upon the investigation, the second incident was determined to be isolated in nature and not connected to any other fraud or instances of improper removal of voters from the voter roll,” she said.

The person familiar with the situation alleged that the county elections office was informed of the assault charges against Baker, but she was allowed to continue working “with no consequences.” Asked about it, county spokeswoman Jennifer K. Smith declined further comment “due to ongoing legal proceedings.”

Arlington Commonwealth’s Attorney Parisa Dehghani-Tafti did not respond to an emailed request for comment.