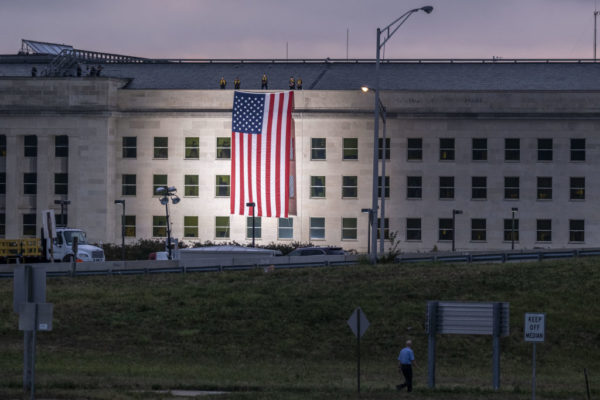 Ceremonies and events will be held in Arlington this weekend to commemorate the 20th anniversary of the 9/11 terrorist attacks on Saturday.

The events will pay tribute to those who died as well as to Arlington’s first responders, whose response to the Pentagon attack has been hailed as a “model for the nation” by the 9/11 Commission.

Among the events on tap are a wreath-laying ceremony, a memorial 5K, a bike ride, a softball tournament, and a private event at the Pentagon for the families of the victims.

With some events at-capacity or closed to the public, the county says locals can observe the day from home, by watching short videos produced by the county, or by hanging American flags.

The Arlington County Public Safety Combined Honor Guard will perform a Presentation of Colors and lay a wreath at county government headquarters at 2100 Clarendon Blvd at 9 a.m tomorrow (Friday). A moment of silence will be observed at 9:37 a.m., when American Airlines Flight 77 struck the Pentagon.

Arlington’s police and fire departments, the Sheriff’s Office and the Emergency Communications Center will host the annual 9/11 Memorial 5K Run and fundraiser this Saturday. The race starts at 6 p.m. on Saturday, Sept. 11 at the DoubleTree by Hilton Hotel in Crystal City (300 Army Navy Drive). The in-person race is at capacity, but the event is still registering virtual participants.

The National 9/11 Pentagon Memorial is currently closed due to COVID-19, with no reopening date set. Family members of victims and other invited guests will be admitted this weekend for a seated event with social distancing and various speakers.

Cyclists will ride 15 miles, starting at 7 a.m. on Saturday, and stop at the nine Arlington fire stations that responded to the attack. The ride ends with a moment of silence and a wreath ceremony.

Those who responded 20 years ago will ride to the Pentagon 9/11 memorial and lay another wreath. All retired and active first responders are invited, as well as family and friends 18 and older. If spots are available, other adults can join as well.

Three local photographers will host a photography exhibit entitled “Still Standing — Still Free” at Fashion Centre at Pentagon City mall, with original photos, a video of the immediate aftermath, 9/11 artifacts and never-before-seen snapshots. The display will be free to the public. It runs from Saturday, Sept. 11 through Monday, Oct. 11.

A softball tournament at the Barcroft Park (4200 S. Four Mile Run Drive) on Saturday will raise money for Pentagon Disaster Relief charities. All games are free to participate in and open to anyone who is interested. Opening ceremonies start at 7:30 a.m. Saturday, and will feature the Armed Services Color Guard, the 3rd Army Old Guard Ceremonial Fife and Drums Corps, and the fire department.