Combining two great things often yields excellent results. Think: Chocolate and peanut butter, Jordan and Pippen (been a while since da Bulls got a shoutout in this column), or Bernard Purdie and just about anyone.

For me, two of my favorites are beer (of course) and traveling. I love visiting some of my favorite breweries when I travel while also finding new ones. When you sit down at a brewery tasting room in a different city or country, it can be difficult to narrow down the choices, especially if you’re not familiar with what beers or styles the brewery is known for.

Asking your server/bartender what they are excited about is usually the easiest way to make this determination, but it can yield varying results if your tastes don’t align. Checking an app like Untappd can help you find what’s popular, but that’s certainly weighted toward extreme examples of some styles. Medals and awards are nice when they are recent or consistent, but there is always a lot that can change in a beer if a brewer leaves or recipes are changed. The one steadfast rule that has never let me down before is, when you see one, always order a Grodziskie. 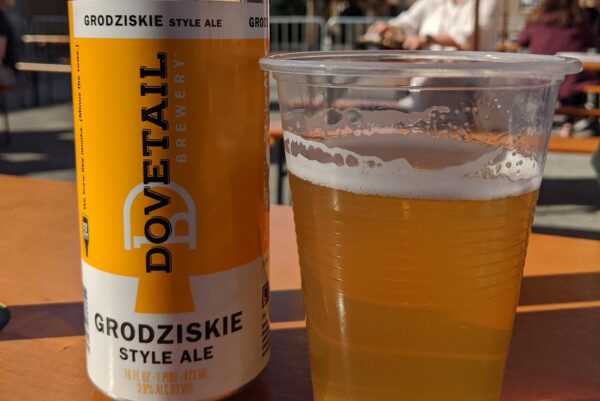 I first read about Grodziskie in Randy Mosher’s book Radical Brewing. I cannot recommend this book enough if you’re interested in home-brewing or even want to learn the history of beer styles. Grodziskie stood out not only because famed beer author Michael Jackson mentions the version Mosher brewed for him in the introduction of the book, but also because it is such an obscure style and something very unique.

This is probably the time to explain to you what that style is. Grodziskie is a Polish smoked wheat beer that is low in alcohol and full of smoky flavor — but it’s also very refreshing. Typically, it’s produced with 100% oak-smoked wheat malt, which, over a decade ago when I first read about it, I couldn’t even find available to buy so I could brew up my own version of the recipe in the book. That, of course, led to the build up of this beer in my mind, a mythical creature I was always on the lookout for. At least for a little while, the scarcity of the raw materials meant no one was really brewing this stuff, and it slipped toward the back of my mind lingering in relative obscurity much as it had throughout much of the 20th century in its native Poland.

I’ll point out that this style still sits in obscurity, and I can count on my fingers how many examples I’ve tried over the years. But of those literal handful of examples I have tried, they all made an impression on me.

When you see a historical style of beer like this, you can typically count on it being a passion project, the sort of thing someone is doing either because they love the style, the history or they just want to test out their brewing chops on new styles. The first commercial example I ever tried was from Live Oak in Austin Texas, and the idea of a light smoky ale that could pair well with piles of barbecue does sound like it could potentially find a wide audience. The truth is no one is brewing up something like this to make boatloads of money. Trust me, I understand how alone I might be in this praise of the style because I’m still looking at what’s left of an excellent example of the style called Puff from Commonwealth that I ordered mostly for myself to drink.

My point and bigger takeaway would be to try something new, try something that someone put their love and hard work into, and be ready to enjoy the experience of it all.