Update at 3:25 p.m. — The driver has successfully been rescued and is being transported to a local trauma center with serious injuries, per scanner traffic.

Earlier: Firefighters are working to rescue an injured driver after their car careened off the northbound GW Parkway and into a thick patch of woods, just north of Spout Run.

The vehicle is reported to be some 50 feet into the woods, on the embankment that leads down to the Potomac River. Firefighters had difficulty locating it after Arlington County’s dispatch center received a 911 call from the driver, who reported having a leg injury; the U.S. Park Police Eagle 1 helicopter helped to locate it, according to scanner traffic.

The driver is said to be conscious and alert as rescuers figure out the best way to get him or her to safety.

Fire boats from Alexandria and D.C. also in the area, ready to assist if rescuers need to bring the driver down to the river instead of up to the Parkway.

The northbound GW Parkway is closed in the area as a result of the emergency activity, according to an Arlington Alert. Google Maps shows heavy traffic on the GW Parkway backing up to the Roosevelt Bridge. 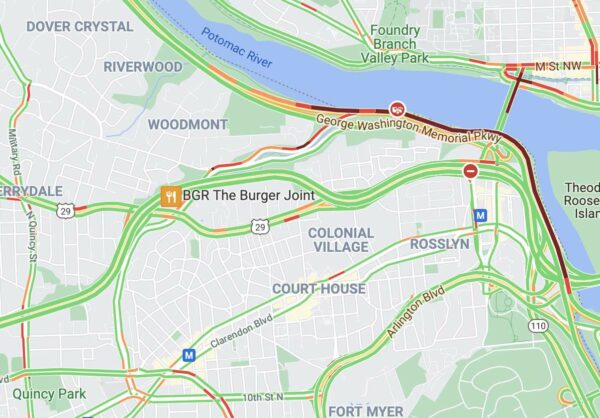 This is not the first time a car has driven well into the woods between the Parkway and the river. Earlier this year the Parkway was partially closed to allow for the removal of two crashed cars in the woods.