A post-Thanksgiving rise in Covid cases in Arlington appears to have plateaued over the past few days — at least for now.

The seven-day moving average of new daily cases in the county currently stands at 67, according to Virginia Dept. of Health data. That’s up from an average of 23 cases per day Thanksgiving weekend.

The last time the Covid caseload was this high locally was mid-February. However, with 91.4% of the adult population in Arlington now at least partially vaccinated, reports of serious illness and death are down significantly since then.

No new Covid-related deaths have been reported in Arlington since Dec. 3, according to VDH. 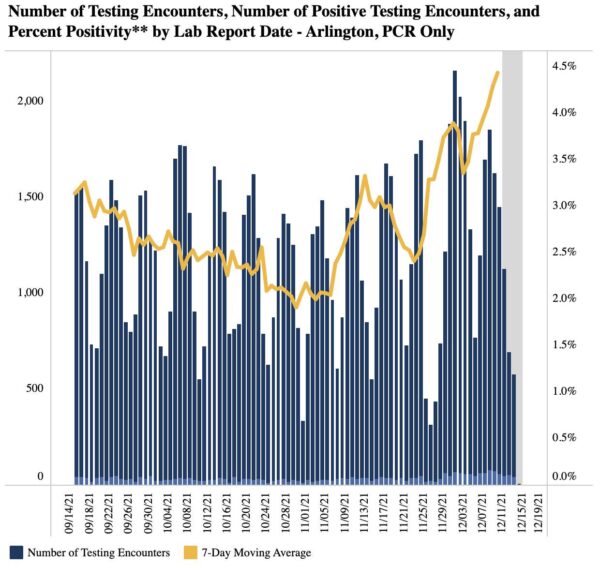 Nationally, there’s both good news and bad news about the pandemic today.

The bad news is that the Biden administration reportedly expects a “large wave” of cases this winter due to the emerging Omicron variant.

“New data from South Africa and Europe hint that Omicron cases are poised to explode in the U.S., where the vast majority of the population isn’t well protected against infection,” Axios reported today. “A new analysis by South Africa’s largest private insurer paints a picture of Omicron’s clinical risk: Two doses of Pfizer’s vaccine appear to be significantly less effective against severe disease with Omicron than previous variants.”

The good news is that the effective end date of the pandemic might be in sight. Drugmaker Pfizer announced today that a new therapeutic drug that combats serious illness from Covid appears to be highly effective.

“Pfizer’s updated results for its experimental treatment for Covid-19 showed it cut the risk of hospitalization or death by 89% if given to high-risk adults within a few days of their first symptoms, the company announced in a news release Tuesday,” CNN reported this morning. “Pfizer hopes it can eventually offer the pills, under the name Paxlovid, for people to take at home before they get sick enough to go to the hospital. Paxlovid combines a new antiviral drug named nirmatrelvir and an older one called ritonavir.”

Such a drug, if it receives FDA approval, could herald the arrival of Covid’s endemic stage, where the virus continues to circulate but poses a lower risk of hospitalization and death thanks to vaccines, prior infection and antiviral treatments — much like the flu.

Until then, the focus of local health authorities remains mitigation measures to prevent rapid spread of the virus and continuing to promote vaccinations and vaccine booster shots. Arlington County is currently offering boosters for 16-17 year-olds, in addition to adults.

END_OF_DOCUMENT_TOKEN_TO_BE_REPLACED

More Stories
RSVP Catering is here to help make it a fun, festive and delicious holidayThe Right Note: The Last One