This weekend is going to be a snack food extravaganza with plenty of commercial breaks, a whole lot of Snoop Dogg (performing in a halftime show and hosting/coaching the Puppy Bowl!) and rumor has it there will also be a football game going on around all of this.

There’s also going to be plenty of beers to go around, both in those commercials and in many of our hands. The sort of light lagers you’ll mostly see advertised will certainly have their place at many parties and on bar tops but if you’re interested in stepping up a few of your pairings I’m here with a few suggestions for you. Now, I’ll say a great craft lager or your favorite IPA could just as easily go with any of these foods and you can feel free to mix and match any of these as well, but I’m going to throw out a few of my favorites and give what you’ll hopefully find to be inspired pairings.

This pairing works incredibly well because the Wit will introduce a bright and fresh element with some citrus and spice. If you’re loading up nachos with fresh guac, pico de gallo and lots of shredduce, a tasty witbier can compliment all those flavors. If you prefer your tortillas smothered in queso, refried beans or chorizo then the higher than average carbonation of the style can cut through those denser, rich flavors.

I really love this pairing because the smoke flavor really incorporates well into chili but a crisp lagered finish can help keep your palate from getting overwhelmed. There’s lots of suggestions out there for porters and stouts here which I love, but in the interest of keeping this party going until at least when the halftime show is over I like the low ABV options. 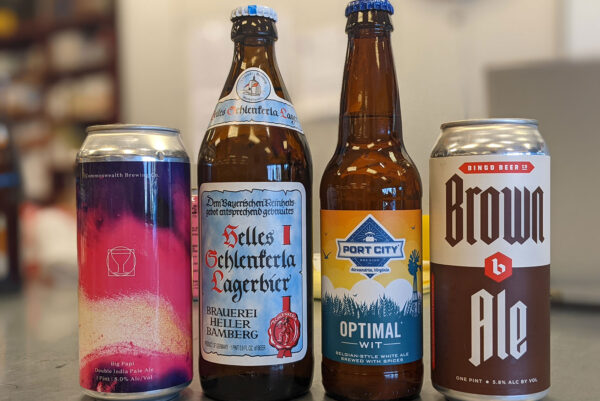 Plan ahead if you’re looking to get delivery on this day since it is one of the busiest of the year for pizza shops or if you’re like me grab some of the Calabrese Salami from our deli and make your own spicy take at home. Brown ale is going to really pair well with the crust, cheese, sauce and meat without overpowering any of them. It can be tempting to grab an IPA or Pilsner here as well but when the cured meats start to join the party I really enjoy the toasty malty compliment here.

Hops are going to play up the spice here but a juicy IPA with low bitterness will keep you from burning your tongue off. I really enjoy the way the heat can play with some of the super tropical or citrusy hop varieties. The nice thing with this pairing is neither one of these are particularly known for their subtlety, the big flavors here can go up against each other for the entirety of four quarters.