The fundraiser begins at 3 p.m. on Sunday, and Gerdan will play “original arrangements of traditional Ukrainian folk melodies” from 4-6 p.m., according to a flier. 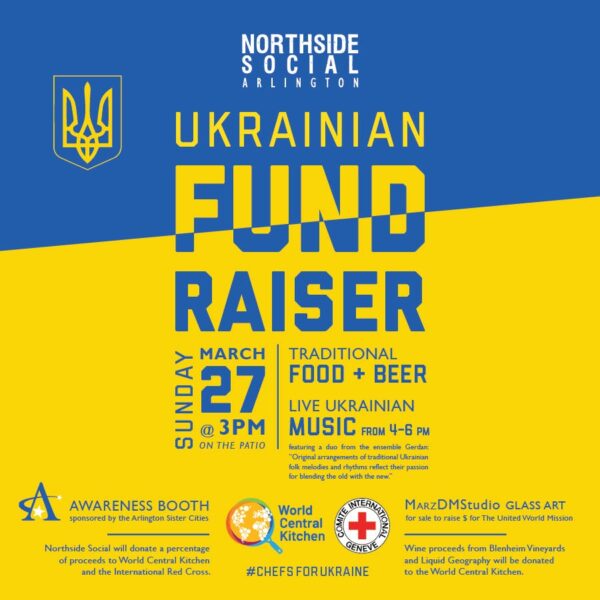 Northside Social will donate a percentage of proceeds to the International Committee of the Red Cross and World Central Kitchen, a nonprofit founded by local celebrity chef José Andrés that’s currently working to feed Ukrainian refugees and those still in the war-torn country. Proceeds from some wine sales will go to World Central Kitchen, the flyer says.

An Arlington-based glass artist, Maria Milton, will be selling pieces at the fundraiser and donating proceeds to United World Mission. The Arlington Sister City Association will be on-site raising awareness about the war and Ivano-Frankivsk.

“If you’d like to stop by and help support, I think it’s going to be a great event,” Arlington County Board Member Libby Garvey said at the Board meeting on Tuesday. “I know it always feels like we’re doing not much, but I think every little bit helps, and the more awareness builds, the more there’s global pressure to bring this horrible, horrible invasion to a halt.”

The Northern Virginia Regional Commission will be sending collected items to relief agencies and churches in Poland “waiting and wanting these goods,” Garvey said.

NVRC requests items be donated no later than April 15.

As the Russia-Ukraine war enters its second month, the U.S. has announced it will accept 100,000 Ukrainian refugees. Today, President Joe Biden is participating in an emergency NATO summit that could lead to more aid for Ukraine and additional sanctions against Russia.