(Updated at 3:45 p.m.) Arlington County police blocked of a busy street near elementary and middle schools this morning to arrest a wanted suspect.

The arrest happened on the 3600 block of 2nd Street S., near Alice West Fleet Elementary School and Thomas Jefferson Middle School. The street was blocked to traffic at the intersection with S. Glebe Road, next to the 7-Eleven.

ACPD spokeswoman Ashley Savage tells ARLnow that a suspect wanted out of Loudoun County was arrested and that this was not a barricade situation. 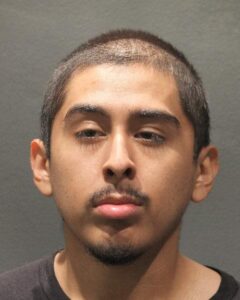 “Police are there and people in green camo/body armor with [rifles],” one tipster said.

In a social media post, police said “there is no ongoing threat to the community related to this incident.”

Later Wednesday, the man who was arrested was identified in a Loudoun County Sheriff’s Office press release as a 20-year-old Arlington resident.

The suspect, Joshua Patino, is accused of abducting a juvenile victim at gunpoint yesterday.

The Loudoun County Sheriff’s Office has charged an Arlington man with multiple felony offenses, including abduction.

Yesterday evening, shortly before 8:00 p.m., deputies responded to the 25000 block of Hartwood Dr., Chantilly, for a report of an abduction. The preliminary investigation revealed that the juvenile victim was forced into their car at gunpoint by a man wearing a mask.

Detectives discovered that the suspect was known to the victim, and detectives worked closely with the Arlington County Police Department to locate and arrest him shortly after 9:00 a.m.

The suspect has been identified as Joshua Patino, 20, of Arlington. Patino has been charged with Abduction, Use of a Firearm in the Commission of a Felony, Brandishing a Firearm, Preventing the Summoning of Law Enforcement, Unlawful Use of a Mask, and Assault and Battery. Patino is currently awaiting extradition back to Loudoun County.

The exact relationship between Patino and the victim, as well as the victim’s age, was not given.