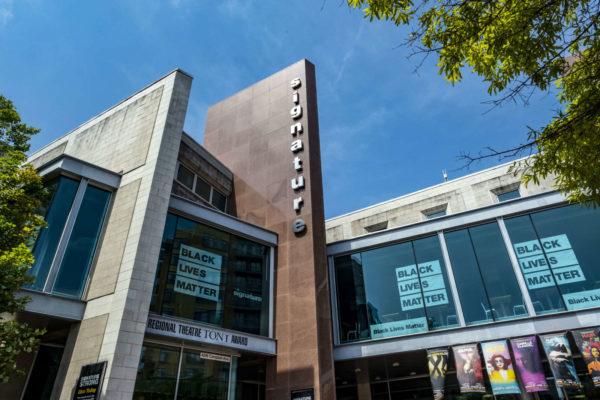 Shirlington-based Signature Theatre has announced a slew of new shows and events as part of a season-long tribute to Stephen Sondheim.

Earlier this week, the well-known local theater on Campbell Avenue released its show schedule for the upcoming season. It will feature a season-long tribute to the American musical icon Stephen Sondheim, who died last November.

The theater has produced 31 Sondheim productions in its history, more than any other theater in North America, per a press release from Signature.

“So Many Possibilities: A Season of Sondheim” will include three all-new productions from Signature of Sondheim classics: “Into the Woods,” “Sweeney Todd: The Demon Barber of Fleet Street,” and “Pacific Overtures,” a rarely-produced musical due to the need for specific casting and production demands.

The addition of three more shows will bring the total of Sondheim shows performed at Signature to 34, a press release notes.

“As the American theater that has produced and championed more of Sondheim’s work than any other, Signature Theatre is proud to present So Many Possibilities in honor of his memory and in celebration of his unparalleled contribution to the American musical theater canon,” Artistic Director Matthew Gardiner said.

Along with three new fully produced musicals, there will also be a number of other events celebrating the lyricist. That includes book signings, sing-alongs, and a collective effort to sing (or speak) every lyric of every Sondheim song called “Sharing Sondheim.”

Signature Theatre opened in Shirlington nearly three decades ago, converting an old auto garage into a theater. In 2007, the theater moved about a quarter of a mile away into a $16 million space that was built in partnership with the county. Signature won the Regional Theatre Tony Award in 2009.

Signature Theatre’s show and event schedule through July 2023, from the press release, is below.

Escape into a fantastical fairytale adventure where dreams come true, but not free. A trove of storybook characters’ paths intertwine as they chase their deepest desires through an enchanted forest. However, once they receive their happily ever after, the unintended consequences of granted wishes unravel their worlds.

The Signature Show: A Tribute to Stephen Sondheim

This special episode of The Signature Show on the first anniversary of Sondheim’s passing will be dedicated to remembering his life and work with songs, musical games, and tributes.

Everything Was Possible: Talkback and Book Signing with Anika and Ted Chapin

Free in The Mead Lobby

Director of Artistic Development Anika Chapin sits down with author and former president of the Rodgers & Hammerstein Organization Ted Chapin to discuss his celebrated book Everything Was Possible: The Birth of the Musical Follies and his long career in the industry. The father/daughter duo will talk about the book, his experience working on Follies and their reflections on Sondheim. The talkback will be followed by a book signing.

Merrily We Sing-Along: West Side Story

The first Merrily We Sing-Along will highlight Sondheim’s lyrical contributions to the score of West Side Story. Whether you’re a Jet or a Shark, come join us for “Something’s Coming,” “Tonight,” “Maria” and, of course, “I Feel Pretty.”

Merrily We Sing-Along: Love, I Hear

In February, join us as we celebrate Valentine’s Day as only Signature can with a dreamy and romantic evening of Sondheim’s love songs, ranging from “Happiness” to “Being Alive!”

A stunning exploration of tradition and transformation based on historical events. In 1853, after 200 years of stability, Japan faces an American expedition determined to open the “floating kingdom” to trade. The isolationist island’s reckoning with the unwelcome western influence is brilliantly illuminated through a kaleidoscope of stories about sailors, samurai, “someone in a tree” and two friends who choose radically different paths.

The final Merrily We Sing-Along features a grab-bag assortment of songs you haven’t heard yet! It will be a surprise race against the clock as we count down and sing out (Louise!) to fill in those final songs in the Sharing Sondheim project.

Returned to London following a wrongful banishment, barber Sweeney Todd’s thirst for vengeance against the corrupt judge who sent him away leads him on a murderous spree. Aided by his downstairs neighbor, baker Mrs. Lovett, the two concoct an unappetizing scheme as they terrorize the city.