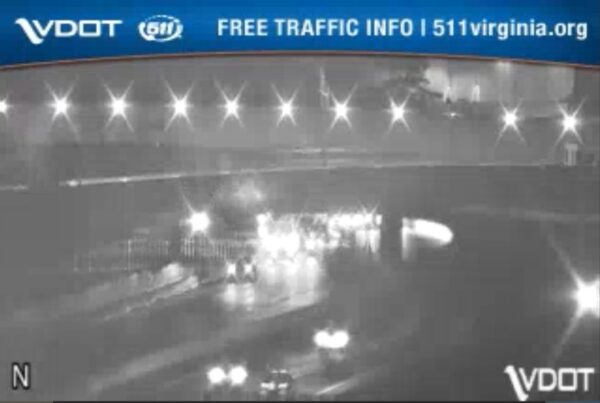 A patient reportedly suffering a mental health crisis overpowered a Butler Ambulance crew at a Montgomery County hospital and took it on a wild ride followed by police cars from several jurisdictions.

The pursuit eventually ended in Arlington, near the Pentagon, after more than 30 minutes.

It started the Maryland hospital around 2:40 a.m. when the patient started wrestling with the crew. He overpowered them and sped off with the strobe lights activated and the rear doors wide open.

The man traveled at modest speeds ranging between 55 and 65 mph while driving the ambulance on the major roads to reach I-270 and then the Beltway, according to scanner traffic.

For much of the trip he was reportedly on the phone with the Montgomery County 911 center. The operators urged him to pull over, but he refused. He continued driving on the Beltway, across the Potomac into Virginia, before turning onto I-66.

Finally, around 3:15 a.m., the man brought the ambulance to a stop in the area of Washington Boulevard and Route 110, adjacent to the Pentagon reservation, and was taken into custody by Arlington County police without further incident.

(Updated at 10:35 p.m.) A pedestrian was injured Saturday evening in the Glencarlyn area of Arlington after getting struck by a vehicle at S. Carlin Springs Road and 2nd Street S.

Officers arrived at the scene around 7:25 p.m.