Bitcoin Pizza, a “virtual restaurant,” opened on Oct. 31 and operates out of the kitchen of Fire Works Pizza at 2350 Clarendon Blvd. It is one of about 100 locations across the country and one of seven locations in the D.C.-area.

The pizzeria was created by branding company Popchew in partnership with Bitcoin influencer Anthony Pompliano.

And, yes, the restaurant accepts Bitcoin as well as U.S. dollars.

“We want to spread the word of Bitcoin through this pizza,” Popchew CEO Rushir Parikh tells ARLnow. “[Pizza] is a very approachable way to learn about Bitcoin. We want to make Bitcoin as widely known and available as pizza is.”

It’s about educating the public on cryptocurrency and making it less scary — all while serving up great food — he says.

Bitcoin Pizza is essentially a ghost kitchen, with the company doing the branding and marketing, a local restaurant (in this case, Fire Works) making the pizza, and a third-party (UberEats, DoorDash, etc.) delivering. Like many ghost kitchens, ordering is online-only.

About 20% of the generated revenue goes to Bitcoin Pizza, Parikh said.

There was no specific reason that Arlington or Courthouse was chosen as a location, beyond wanting to have a number of locations in and near major cities, he notes.

The idea for a pizzeria was inspired by the famous — in the crypto world, at least — story of how a Florida man in 2010 purchased two pizzas for 10,000 bitcoins. Eleven years ago, that equated to about $40 US dollars. Today, 10,000 bitcoins are worth more than $500 million.

October 31, the day of Bitcoin Pizza’s Arlington launch (along with the launch of a number of other locations) is also an important day in the cryptocurrency’s history. On Halloween 2008, Bitcoin founder Satoshi Nakamoto released the Bitcoin white paper which explained its rules, workings, and structure.

On its website, the company behind Bitcoin Pizza, calls itself “the coolest food court on the internet.” Parikh compares the aspirations of Popchew to Yum! Brands, which owns fast food staples Taco Bell, Pizza Hut, and KFC.

“What we want to do is work with influential brands and people to build the next generation of food brands,” he says.

Working with local restaurants, like Fire Works Pizza, allows the company and its ideas to scale up quickly.

And Popchew is already working on its next food brand. “Wingszn” has launched and is expected to open a location in Arlington in the next month or two, Parikh says.

That “virtual restaurant” will be serving up chicken wings and yes, you can pay with Bitcoin.

Bitcoin has surfed to an all-time high amid the pandemic, and there’s at least five Bitcoin ATM machines in Arlington where you can buy the cryptocurrency.

One Bitcoin is currently worth nearly $27,000, just down from a recent peak, but still a massive increase as its value has more than tripled over the past year.

Locally, Bitcoin’s rise has been further fueled by a recent $650 million investment from Tysons-based firm MicroStrategy.

“The new pandemic crisis just sped things up,” local Bitcoin investor Raj Paladugu told ARLnow. “It could take money from the gold market in just three years, instead of the five years that was forecasted.”

Bitcoin ATMs — also known as BTMs — have been in Arlington since 2015.

At one location, the Bitcoin Depot ATM at the Pentagon City mall (1100 S. Hayes Street), customers can also buy the cryptocurrencies Litecoin and Ethereum, according to the company’s website.

Other publicly-listed BTM locations in Arlington include: 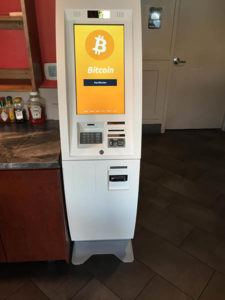 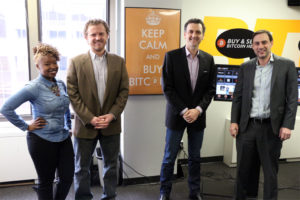 Bitcoin is hard to explain. It’s a “crypto-currency,” and it’s worth real money — just like Euros and pesos are worth real dollars — but it’s completely digital.

Blockchain Technology Consumer Solutions — or BTCS for short — was launched in 2013 as Bitcoin Shop, an ecommerce platform that allows users to buy goods with bitcoins and other digital currencies, like Dogecoin or Litecoin. Bitcoin Shop founders Michal Handerhan and Tim Sidie, now COO and lead developer respectively, had bought bitcoins but didn’t know how to spend them. So they created a way.

“They got some immediate traction from consumers and offers to help fund the company,” Chief Marketing Officer Charlie Kiser told ARLnow.com from BTCS’ Rosslyn office this month.

Kiser, who has worked in startups for years in the D.C. area, joined the team along with now-CEO and Chairman Charles Allen. In February 2014, Bitcoin Shop went public, raising $1.875 million in its initial public offering.

“Going public is not the most traditional route for startups,” Kiser admitted, “but it’s great in terms of speed and confidence in getting something closed. The idea was we could be one of the first publicly traded companies and we could accomplish some things in an industry with a lot of unknowns.”

In fact, most of the crypto-currency industry is unknown. While the currency exists, it’s not run by a bank or a government. It’s decentralized and far more unstable than currencies of developed countries. One bitcoin was worth more than $1,000 U.S. dollars near the end of 2013. Earlier this month, it was down below $200, and currently it’s hovering around $240.

There is no mint for bitcoins, either. Instead of a government printing them, they are “mined.” BTCS has a partnership with a bitcoin mining company in Israel. How are they mined? Anyone who wants a bitcoin must provide technological maintenance to the bitcoin system. The more bitcoins are circulating in the world, the more work a “miner” must do to get a bitcoin.

Bitcoins are exchanged and circulated on the “blockchain,” a “de-centralized peer-to-peer network” that works “effectively as a ledger system, reporting transaction,” Kiser says. Bitcoin was simply the first use of the block chain — many more are anticipated down the road.

That’s what intrigued Allen, a former engineer who was working at an investment bank before joining the company.

“I said ‘this company’s going to be much bigger than e-commerce,'” Allen said. “Bitcoin is basically the Internet in 1995. Back then, no one thought it had any use, but the technology made sense. At the heart of bitcoin, the technology makes sense.” 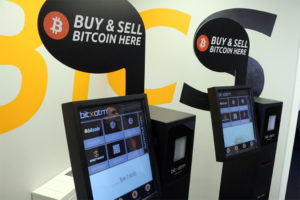 BTCS has invested in a company that produces bitcoin ATMs and is currently developing a bitcoin wallet, similar to Google Wallet, that will help its users keep their currency secure. BTCS hopes to be an access point for anyone to enter the crypto-currency space, in any form they choose.

“We’re hoping we can be a market leader into giving access to the digital ecosystem,” Kiser said. “We’re hoping BTCS is where you come for all that.”

Unlike other startups in emerging industries, BTCS has public investors to answer to. Investors can look to the four investments and one partnership BTCS has made as signs of progress toward market leader status. However, it’s simply too early to tell if these early gambles will pay off.

“We are long on bitcoin and blockchain,” Kiser said, “and we are getting ready to enter the valley of innovation. Whether it’s the currency or the blockchain, there’s been enough invested to know in five years whether there will be a consumer case for it.”

Through its investments and products, BTCS hopes to be the ones to usher the new technology into that era, but it’s waiting on the industry to help.

“There are all these problems that the technology solves,” Allen said. “They just haven’t been built yet.”