Less than two months after two of his employees pleaded guilty to charges stemming from last year’s change-of-government petition drive in Arlington, political strategist Shawn Wilmoth has been indicted on two felony counts of election fraud.

Wilmoth was the president of Signature Masters, the firm that was contracted to collect signatures for last year’s unsuccessful attempt to change Arlington’s form of government. The petition drive was sponsored largely by Arlington’s police and fire unions.

Two of Wilmoth’s signature collectors, Cheryl Simmons and William Cockerham, pleaded guilty to election fraud charges in February. State law specifies that petition signatures must be witnessed by someone who is at least eligible to register to vote. As convicted felons, neither Simmons nor Cockerham were eligible.

In a statement of fact entered as part of Simmons’ guilty plea, prosecutors said that Simmons told Wilmoth that she had been convicted of a felony before she was hired. Nonetheless, prosecutors say Wilmoth hired Simmons to collect signatures at a fee of $3 per signature. Later, when news reports revealed that Simmons was a felon, Wilmoth told the Washington Post that Simmons had passed a background check.

“It was an issue with the background-check company we are dealing with,” he told the paper.

Prosecutors said most of the 55 petitions pages that Simmons signed as a witness were handed to her by Wilmoth at a local Starbucks. Only a few pages, prosecutors said, contained signatures she had actually collected.

An Arlington grand jury handed down an indictment for Wilmoth on March 28. A warrant was then issued for his arrest. He was arrested Friday afternoon in Warren, Mich., according to Assistant Commonwealth’s Attorney Andy Parker. Lt. Eric Schulz of the Warren Police Department confirmed Wilmoth’s arrest and said he was likely being held at the nearby Macomb County Jail.

END_OF_DOCUMENT_TOKEN_TO_BE_REPLACED 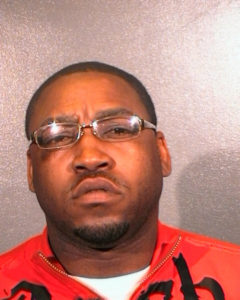 (Updated at 4:40 p.m.) Court dates have been set for the two individuals accused of committing election fraud during the summer’s failed change-of-government petition drive.

William Cockerham, accused of making a false statement on a required form, appeared in Arlington County Circuit Court today, was appointed an attorney, and was given a trial date of March 7, according to Assistant Commonwealth’s Attorney Andrew Parker.

Convicted felon and petition drive contractor Cheryl Simmons, who was indicted on the charge of voter fraud on Monday, did not appear in court today, Parker said. She’s expected to attend a hearing on Jan. 3, at which time a trial date will be set.

Simmons and Cockerham both face between one and ten years in prison and up to a $2,500 fine if convicted.

Parker could not say whether additional charges are likely against other Committee for a Better Arlington (CBA) contractors. A group that opposed the petition effort, the Coalition for Arlington Good Government, raised questions over the summer about the conduct of four petition workers, including Simmons and Cockerham.

The Coalition issued the following statement this afternoon.

This summer the Coalition for Arlington Good Government (CAGG) published a report detailing serious irregularities in the collection of signatures for the change of government petition.  The report can be found at www.arlingtoncoalition.org.

Our concern, then and now, remains the integrity of Arlington elections, and protecting our community from unethical and illegal efforts that may have been organized by paid out-of-state political operatives to fabricate a local “grass roots” movement.  Yesterday’s indictments appear to confirm that the Change of Government effort violated the trust of Arlington voters. We welcome the continued scrutiny by the Commonwealth Attorney’s office of the way in which this petition drive was conducted.

On April 27, Cheryl Simmons walked out of the Arlington County Detention Facility, having served 23 days in jail for a probation violation. About a month later, while still on parole, she became one of the top signature collectors for the Committee for a Better Arlington, the group formed by the police and fire unions to get a proposed change to Arlington’s form of government on the November ballot.

Simmons, who was hired by a contractor that specializes in collecting petition signatures, should have been well-known to local law enforcement, had they seen her collecting signatures on their behalf.

In 2006, Simmons was arrested for shoplifting and giving her family unauthorized discounts at the Arlington Hecht’s department store, where she worked, according to Arlington Police spokesperson Crystal Nosal. Court records show she plead guilty to felony embezzlement — a more serious charge since it was her third offense — and was sentenced to three years probation.

Late last year she was in trouble again, for passing a bad check at a check cashing store on Columbia Pike, police said. She served jail time between January and February for the charge, and in April for the probation violation, according to the Arlington County Sheriff’s Office.

Despite the rap sheet, Simmons was able to get hired by the contractor a month after her release, and apparently found the motivation to collect the third-highest number of signatures for the petition effort, with 2,916.

“That would be a shock to me,” said police union president Ken Dennis, upon learning of Simmons’ criminal background last night. “We just hired a company that had good references… I’m disappointed that they had this person on their staff.”

Dennis said he had never met Simmons nor heard her name mentioned.

Late Wednesday, after a “concerned citizen” brought the felony charge to the attention of election officials, Arlington County Registrar Linda Lindberg disqualified the 2,214 otherwise valid signatures submitted by Simmons, according to a person familiar with the situation. Only (correction: only individuals eligible to register to vote) are permitted to collect signatures for initiatives in the county, and as a felon Simmons would have been ineligible to vote.

Earlier this week, the anti-petition Coalition for Arlington Good Government alleged that Simmons may not have collected the now-disqualified signatures herself. Instead, CAGG said, the Arlington resident and another top signature collector, Natasha Robinson, may have signed off on petition sheets collected by out-of-town signature collectors brought in by the contractor. So far, there has only been circumstantial evidence to support the claim.

END_OF_DOCUMENT_TOKEN_TO_BE_REPLACED 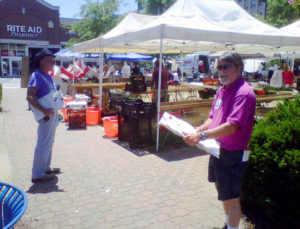 With the petition to change Arlington’s form of government heading toward near-certain defeat, the Coalition for Arlington Good Government is trying to slam the last nail in the coffin with explosive allegations of possible fraud and illegal practices by the pro-petition Committee for a Better Arlington.

CAGG, a largely Democratic group set up to oppose the change-of-government proposal, alleges that CBA used hired, out-of-state signature gatherers who were legally ineligible to circulate petitions in Arlington. Then, CAGG suggests, two individuals may have falsely signed affidavits claiming to have collected the signatures actually gathered by the out-of-town contractors. More than 6,000 signatures may be invalid as a result, CAGG says.

The two individuals in question collected a suspiciously large number of signatures in an unusual manner, according to CAGG. Other evidence, methodically laid out in a nine-page PDF file, calls into question the integrity of the affidavit portion of the petitions, some of which appear to have different handwriting for the same individual.

CAGG also questions the ethics and judgment of former CBA campaign manager Dena Kozanas. The group says Kozanas did double-duty as a notary for more than half the submitted petition sheets, in violation of the conflict-of-interest provision in the code of conduct for notaries in the state of Virginia. 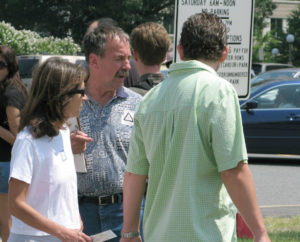 Thursday is the deadline for change-of-government supporters to submit 14,350 signatures to the county registrar in order to get a referendum on the November ballot. According one of the contract signature collectors hired by the Committee for a Better Arlington, which wants to change Arlington’s form of county government, they have already exceeded that number.

Speaking to ARLnow.com at the Columbia Pike Farmers Market Sunday afternoon, signature collector Robert Farrell said they’ve collected about 15,000 signatures already and are trying to collect about 2,000 more by the deadline as a “cushion” to make up for signatures that might be disqualified by the registrar (due to duplicate signatures or an out-of-county address).

Officially, the Committee has declined to discuss the exact progress of its signature-gathering effort, except to express confidence that it will be successful.

Signature collectors have had to put in “a lot of legwork” and overcome a number of challenges, Ferrell said. He cited demonstrators who show up at events with “decline to sign” signs from the anti-referendum Coalition for Arlington Good Government. The sign holders are generally respectful, Ferrell said, although he has encountered “hostility” from about one in every 1,000 people he approaches.

Meanwhile, the number of places where Committee contractors and volunteers are allowed to gather signatures has become a bit more limited. The Committee used to rely heavily on collecting signatures outside Giant and Safeway stores. Ferrell said he was told a week ago that they were no longer welcome outside the stores due to unspecified complaints.

Ferrell, a self-described native Arlingtonian who returned from living elsewhere to help the petition effort, said that means he will just have to “keep on trucking” at another high-traffic location.