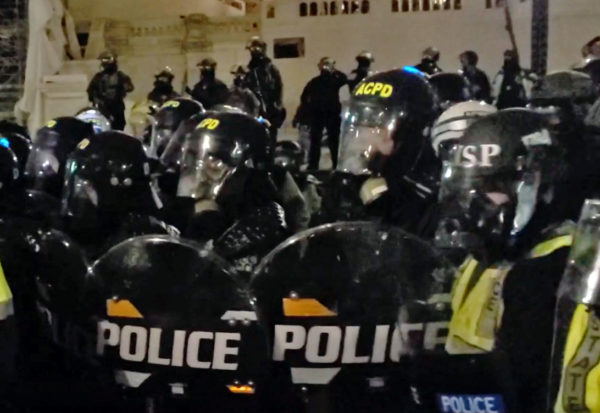 Arlington County Police officers in riot gear could be seen defending the U.S. Capitol tonight in a new video.

The video (below) shows ACPD officers alongside Virginia State Police and D.C. Metropolitan Police in front of the Capitol, keeping back an angry pro-Trump crowd. The video-taker says it was taken around 5:40 p.m., just before a curfew took effect in D.C. and Arlington.

Later in the video, Metropolitan Police officers can be seen pushing back the crowd, to jeers. At one point, a man holding a large Confederate flag starts fighting with police and is taken to the ground by a group of baton-wielding D.C. officers.

Large contingents of Arlington police and Virginia State Police are in the District as a result of a mutual aid request from D.C. authorities amid the storming of the Capitol.

The sight of riot gear-clad Arlington officers in the District is striking given the events of this past summer, when similarly-equipped Arlington officers — supporting U.S. Park Police outside the White House after a mutual aid request — were pulled from D.C. after being pressed into service clearing crowds for a presidential photo op. 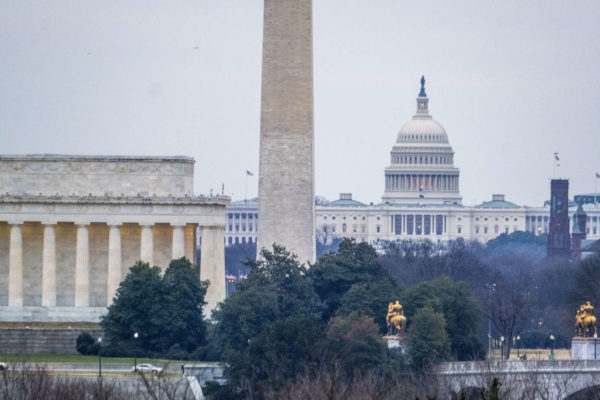 The governor says that there will be “limited exceptions” to the curfew. He has also declared a State of Emergency. The curfew matches that declared by D.C. Mayor Muriel Bowser amid chaos at the U.S. Capitol.

At the request of @AlexandriaVAGov and @ArlingtonVA, I am declaring a 6PM to 6AM curfew in these jurisdictions, with limited exceptions.

I am also issuing a State of Emergency in Virginia, so we can continue to respond.

In a statement, Arlington County reiterated that during the curfew “it is illegal for any person to be present in any street, park, or other public place, unless an exception applies.” Those exceptions include “persons traveling to and from home, work, or places of worship; government, emergency services, and hospital personnel; members of the news media; and persons seeking emergency services. “

“Violation of the curfew order is a Class 1 misdemeanor, punishable by up to 12 months in jail, a fine of up to $2,500, or both,” the statement said.

All was quiet in portions of Arlington’s Metro corridors seen by ARLnow reporters after 6 p.m. In Rosslyn, a group of men gathered at the Marine Corps War Memorial dispersed as night fell. No crowds could be seen in Ballston, Crystal City and Pentagon City, though a few individuals were walking around, perhaps unaware of the curfew that had gone into effect less than an hour prior.

A few pro-Trump supporters, sporting MAGA hats, were seen on the street clutching bags of take-out in Crystal City.

The curfew has prompted some businesses to close early. Among them is District Taco, which is closing its Arlington and Alexandria at 8 p.m. A Safeway spokesperson retracted an earlier statement that Arlington stores were closing early.

“In the interest of public safety and to allow law enforcement officers to continue a visible presence in the community, Arlington County and the City of Falls Church Circuit Court, General District Court, and Juvenile and Domestic Relations Court will be closed on Thursday, January 7, 2021,” the county said.

More police and fire department resources, meanwhile, have been heading from Arlington into D.C., including several Arlington medic units and a convoy of Virginia State Police cruisers.

More Arlington medic units are being dispatched into the District, per scanner. Sounds like they’re going to a fire station to help fill in for their D.C. counterparts.

Earlier, the County Board convened a closed meeting at 4:45 p.m. today (Wednesday) to discuss “the events that have occurred” in D.C.

“Folks, please stay safe,” de Ferranti said at the conclusion of the closed meeting. “We anticipate that within the coming minutes to the next half hour, we will be coming forth with a County statement with respect to this evening. So, stay home, stay safe, take care of yourselves and take care of each other.”

After the curfew was issued, Dehghani-Tafti issued a statement via social media.

“Our overarching goal is to keep the community safe,” she wrote. “And, while we respect the right to peacefully assemble and protest, Arlington will not tolerate violence or disorder in our community. These are difficult and stressful times, in which we all need to play our part in maintaining calm. We have much work to do when we get through this, and we have the fortitude to do it.” 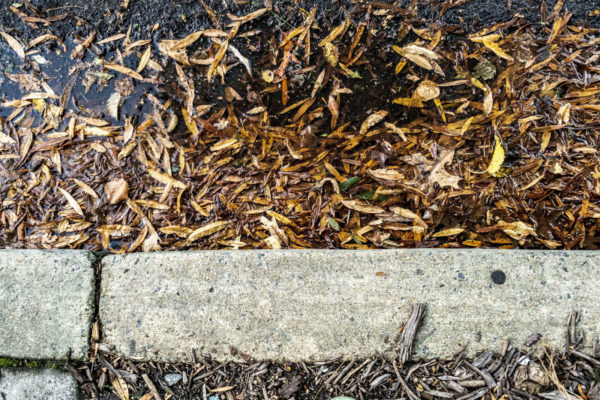 Days Inn’s Days May Be Numbered — “An aging hotel along Route 50 in Arlington could be redeveloped… Arlington’s Planning Commission will study a roughly 2-acre site at 2201 Arlington Blvd., currently the home of the Days Inn by Wyndham hotel, to understand how it could accommodate new construction in the future. Shooshan is pitching a mix of apartments over retail, and perhaps some townhomes, for the property.” [Washington Business Journal]

Police Planning Halloween Parade — “In lieu of traditional trunk-or-treat events in the neighborhoods, the Arlington County Police Department’s Community Outreach Teams are dressing up their cruisers in creative costumes for a vehicle parade through the County” on Saturday afternoon. The parade will go through: “Lyon Village, Bluemont/Westover, Buckingham, Arlington Mill/West end of Columbia Pike, Green Valley, Aurora Hills, and Shirlington/Fairlington.” [ACPD]

Halloween Health Reminders — “While Halloween is not an official holiday, and is not regulated by the County, Arlington is asking everyone to continue to practice the behaviors we know slow the spread of COVID-19: avoid close contact with people not in your household, wear a mask and practice social distancing and frequent and proper hand washing. This may mean choosing not to participate in Halloween this year.” [Arlington County, @kcristol/Twitter, ARLnow]

W-L Grad Indicted for Philly Fire — “Ayoub Tabri, 24, of Arlington, VA, has been charged by Indictment for the arson of a Pennsylvania State Police (PSP) vehicle. Both incidents occurred during violent civil unrest in Philadelphia on May 30, 2020.” [Dept. of Justice, Philadelphia Inquirer, FBI]

MCM is Woman’s Arlington Farewell — “Since COVID, my husband and I, we found out we’re moving out west to Seattle, Washington,” outgoing Arlington resident Elizabeth Sloss told WTOP, about her upcoming virtual Marine Corps Marathon run. “I’m using this race as a farewell tour of D.C. to visit all my favorite places and important locations that have a lot of significant meaning to me.” [WTOP]

Bishop’s Statement on France Attacks — “In union with people of goodwill throughout the Diocese of Arlington, the people of France and around the world, I express my deep sorrow and offer fervent prayers for those impacted by the terror attack at the Notre Dame Basilica in Nice, France, this morning. My prayers are with the individuals killed and those injured, as well as their families and the larger community.” [Arlington Catholic Herald]