Arlington’s Human Rights Commission is honoring four organizations and two individuals for their contributions to diversity and human rights over the past year.

Recipients include a seven-decade-old church in Arlington Ridge, the Arlington Branch of the NAACP and a community activist in the Halls Hill neighborhood.

A virtual celebration for the honorees will be held on Thursday, Dec. 9.

The James B. Hunter Human Rights Awards are given annually to individuals, community groups, non-profit organizations and businesses that best exemplify “outstanding achievement in the area of human rights and diversity made in Arlington County.”

The award is named after the former County Board member who championed the 1992 amendment to county law that prohibited discrimination based on sexual orientation. Hunter died in 1998 at the age of 58 due to cancer.

Advent Lutheran Church (ALC) is located in the Arlington Ridge neighborhood and was first established in the 1950s.

“ALC willingly puts on the mantle of servant leadership and continually answers the call to help those in need, advance diversity, and advocate for human rights on behalf of the residents of Arlington County,” the press release says about why the church is being honored.

Arlington Thrive provides residents in need same-day, emergency financial assistance. The organization has been on the forefront helping the most vulnerable during the pandemic, providing a “safety net” for those who lost their livelihoods.

This year’s award also recognizes the Arlington branch of the NAACP for its recent work advancing racial, economic justice and equality. The organization called on the county to investigate an inmate’s death at the county jail, to fix conditions inside of the Serrano Apartments on Columbia Pike, and to change the county’s previous logo depicting Arlington House, the former home of Confederate Gen. Robert E. Lee.

“The award is validation that our all-volunteer organization is bringing crucial social justice issues and impacting the forefront,” branch president JD Spain, Sr. tells ARLnow, while noting that there’s still much work to be done. “So we thank the committee for the award and look forward to joining hands to create a better future here in Arlington.”

Offender Aid and Restoration (OAR) is a five-decade-old nonprofit that provides a re-entry readiness program for those who have spent time at the county jail, amongst a host of other services.

“Racial equity and an authentic commitment to dismantling racism in Arlington flow through every aspect of how OAR operates — from service delivery to legislative advocacy to internal operations to community education and even to fundraising strategies,” said a press release about the awards.

Les Garrison of Aurora Hills is a long-time civic volunteer who worked to provide residents access to COVID-19 testing, vaccinations and food throughout the pandemic. His work to coordinate has been a “a beacon of selflessness and optimism for Arlington.”

Wilma Jones Killgo is a fourth-generation Arlingtonian who wrote a book about her childhood in Halls Hill, also known as High View Park. She’s a community activist, a fourth-term president of her civic association and a passionate voice for her neighborhood. 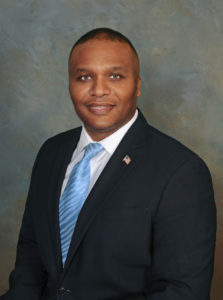 Last week, we asked the two Democratic candidates in the House of Delegates race for the 49th District to write a sub-750 word essay on why the county’s residents should vote for them in the June 11 primary.

Here is the unedited response from Julius “JD” Spain, Sr.:

The 49th District deserves the best leadership. As Delegate, one my priorities will be to introduce legislation to reform our mental health system. In Virginia, our mental health system is broken, and we are losing too many children and young adults because we have not done enough to support them. This issue is one that requires immediate attention. I will work with experts in mental health to improve access to mental health resources for individuals and families.

I will advocate for polices and legislation that will allow people in the community to work near their homes, ensure we have adequate affordable housing, reliable and economical transit, and quality affordable childcare. I will fight for social justice and criminal justice reform, including discrimination based on race, gender, socio-economic status and against our LGBTQ community. I pledge to protect the rights of all and work for safer communities.   I will work to fix the many public transportation and safety issues from the Seven Corners region to Columbia Pike which have left behind.

The people of the 49th District can trust that I will deliver on these promises because I have a track record of service to this country and in our community. I served our country honorably for 26 years in the United States Marine Corps retiring in December 2016. The hallmarks of a Marine are honor, courage, and commitment and those characteristics are part of my moral fabric. When elected, I will bring these qualities and values to the position always remembering to be faithful to the people.

Having served on Capitol Hill as a Congressional Fellow in the US Senate, and as a Senior Legislative Advisor for the Marine Corps Office of Legislative Affairs-Pentagon, I have a thorough understanding of legislative affairs and public policy. I am a team player and results-oriented leader.   In 2014, the Arlington County Board appointed me to serve for four years as Commissioner to the Arlington County Civil Service Commission and I currently serve as president of the Arlington Branch NAACP, which is the nation’s oldest civil rights organization. As a delegate, I will stand up against any form of racism and discrimination of citizens.

This election is about Integrity, Character, Judgement, Transparency, and Accountability. Now, more so than ever, it is essential voters of one the most vibrant and diverse communities in Virginia take a position on what type of leadership we want leading our district and representing us in Richmond. I am happy to have the support of community leaders Dr. Alfred O. Taylor, Jr., The Honorable Frank Wilson (Retired), Mr. Gabe Rubalcava, Vice Chair of the Arlington County Board, The Honorable Libby Garvey, countless citizens, and pleased to have earned the endorsements and support of OUR Revolution Northern Virginia and OUR Revolution Arlington.

This campaign is about inclusion. I am proud that I have taken no donations from corporations or special interests’ group. If elected, I will continue with this pledge. I hope the people of the 49th District will give me the opportunity to represent them, confident they will have a leader that is Progressive, Transparent, and Accountable. 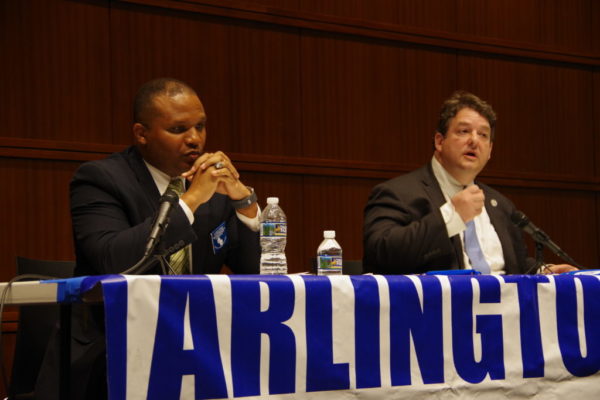 “While these endorsements are an excellent way of showing broad support from trusted voices — and the types of issues I look forward to enacting — the most important measure of support for the upcoming primary is the depth and breadth of our campaign’s robust volunteer operation,” Lopez said in a statement to ARLnow, noting that a team of volunteers knocked on over 1,000 doors for his campaign last weekend.

Lopez said earlier this month he was “honored” to have so many labor groups endorse his campaign and pledged to “continue our fight in the General Assembly” against policies like right-to-work, which he says hurts workers and families.

With less than a month to go before the June 11 primary, Spain does not boast as lengthy a list of endorsements as his opponent, but he has received support from at least one prominent progressive group as well as local community members and activists.

“I, along with my entire team, [am] excited to have received the endorsement of the progressive and nationally recognized political action organization Our Revolution Arlington yesterday and Our Revolution Northern Virginia a few weeks ago,” Spain said, in an email statement today. “Additionally, the endorsements of prominent African-American and Latino community activists such as Dr. Alfred O. Taylor, the Honorable Frank Wilson, Mr. Gabriela Rubalcava, and Ms. Ingrid Vaca, who represent THE PEOPLE at the grassroots level resonates with voters.”

Our Revolution originally formed as an outgrowth of Sen. Bernie Sanders’ presidential campaign before forming local chapters nationwide. The Arlington chapter repeatedly protested Amazon’s deal with the county for its second headquarters last year, and now is endorsing Spain’s candidacy.

I am so grateful to Our Revolution NOVA for supporting a great set of primary challengers who will shake up the priorities of the establishment. It feels great to be part of the momentum behind progressive change on the economic, environmental, and social justice fronts! pic.twitter.com/x5GIz5jnix

Former School Board member Frank Wilson is among those endorsing Spain. He said in a statement that the former Marine “has a great deal of proven experience as a public servant” and is “honest, reliable and willing to work the long hours needed for a Delegate representing the people in District 49.”

“This campaign is built around inclusivity, believes in empowerment of others, transparency, and accountability,” Spain said. “I will always choose the working class over special interests and moneyed elites. Given the incumbent’s lack of transparency coupled with the events in Richmond this past February, I am confident voters in the 49th District are tired of the status-quo and ready for change.”

Campaign finance filings indicated that Spain had $6,364 left at the end of March in his coffers. He had poured more than $20,000 of his own money into the campaign to bolster his fundraising, which he restricted to donations from individuals.

Lopez, meanwhile, reported a war chest of $102,280 at the end of the first quarter, after raising money from clean energy groups and alcohol lobbyists, among others. All candidates running for election will release a new set of campaign finance reports next month.

Voters will choose between the two candidates for the Democratic nomination during the June 11 primary, and vote for their final choice during the November 5 general election.

Because no candidates from other parties are currently running for the 49th District seat, the primary could determine the result of the general election; however, independent or Republican candidates can still announce their intent to run after the primary.

Virginia residents can check both their voter registration status and the location of their polls online.