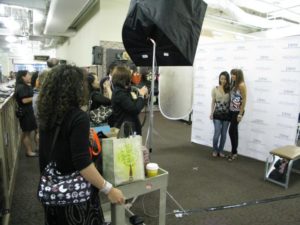 It could have been the lack of advance notice. Or the low foot traffic around the somewhat unusual choice of venue. Or could it be that in the reality show age of the shrill and the controversy-addicted, where the racier Miss USA pageant seems to get all the headlines, that the wholesome Miss America institution is losing a bit of cultural relevance?

Either way, there were remarkably few people queuing up to see the woman who represented their hometown and their home state while capturing what is still one of the most prestigious and recognizable titles in American life.

Caressa Cameron, the reigning Miss America and the former Miss Arlington and Miss Virginia, signed autographs and took photos with fans at the DSW Shoe Warehouse In Pentagon City for three hours Tuesday night. The stream of fans was slow but steady. Only occasionally did a line form.

One could argue that the Miss Arlington title itself isn’t really the draw one might think it would be, since the contest actually draws young women from around the state, not just from within the county. And it could also be said that with everything else that goes on in Arlington, beauty pageants may not be high on most people’s priority list.

Nonetheless, Cameron’s “homecoming” (she’s actually from Fredericksburg, Va.) was a decidedly low-key affair. But that didn’t seem to faze someone who has made a career out of poise and grace.

“This is the first time I’ve been back in Arlington since winning,” she noted enthusiastically, saying it was exciting to see members of the local pageant board again. Familiar faces seems to be in short supply in the life of Miss America. 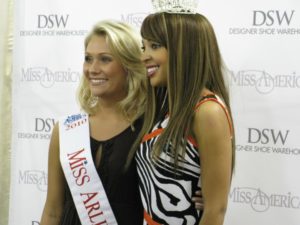 “I travel every 36 hours, about 20,000 miles a month,” Cameron gushed. “I’m up, most of the time, before 4:30. I have interviews in the morning, I go to children’s hospitals during the day, I do fundraising events at night. I do sponsored events like this with DSW to meet the American public and to get the Miss America brand out there. So it’s a busy life. I just got back from Germany where I was able to visit the troops there — some of our wounded warriors at Landstuhl.  I have a wonderful, wonderful job and I enjoy it.”

After her reign is completed, Cameron hopes to move back to Virginia and become a news anchor in the D.C. area.

“I don’t want to leave Virginia, I’m such a Virginia girl. Working in the Arlington-D.C. market would be absolutely perfect. So hopefully there’s a home for me when I’m done,” she said.

One person who came out to see Cameron was Lindsay Morris, who in December succeeded Cameron as Miss Arlington. The James Madison University student said one of her reasons for making the drive up with her parents was to seek inspiration.

END_OF_DOCUMENT_TOKEN_TO_BE_REPLACED

Reigning Miss America Caressa Cameron will be returning to Arlington tonight for an appearance in Pentagon City. Cameron, who won the Miss Arlington pageant before being crowned Miss Virginia last year, is technically from Fredericksburg, but we’ll call this a “homecoming” regardless.

Cameron will be appearing at the DSW Shoe Warehouse (1301 South Joyce Street) at Pentagon Row from 6:00 to 8:00 p.m. Customers will be able to meet Cameron, take a photo with her and get her autograph.

The store will be offering 15 percent off regularly-priced merchandise during the event and $100 gift cards will be raffled every half hour.

Caressa Cameron, who was crowned Miss Arlington 2009 and then Miss Virginia 2009, was crowned Miss America 2010 on Saturday’s nationally-televised pageant. Cameron, a Fredericksburg, Va. native, wins a $50,000 and will now embark on a national publicity tour.

Cameron’s first appearance was on Live! with Regis and Kelly this morning.  She will appear on entertainment show EXTRA tonight.  The show airs locally at 2:00 AM on ABC 7 (WJLA).

Although Cameron’s media duties will keep her in New York for now, expect a homecoming for the beauty queen no later than April. Traditionally, Miss America winners participate in the National Cherry Blossom Festival parade.

The Washington Post‘s story about Cameron’s win can be found here, interviews with her parents here, and comments on Cameron’s winning qualities from pageant judge and radio host Rush Limbaugh here.