Artisphere (1101 Wilson Blvd) in Rosslyn is hosting a unique show this weekend.

“The Pigeoning” is a bunraku puppet show for adults, featuring “live original music and lo-fi special effects to describe the divide between man and nature and the illusion of safety and control in the context of the end of the world.” 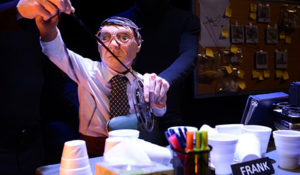 The dark comedy follows a neurotic main character  named Frank who “becomes vexed by pigeons that live in a nearby park.”

“Convinced the pigeons are plotting against him, Frank sets out on an adventure to solve a problem that perhaps isn’t really there,” according to the Artisphere website. “New York-based creator and director Robin Frohardt worked closely with composer Freddi Price and an ensemble of five puppeteers to develop humorous, dialogue-free scenes that succinctly capture the absurdity of Frank’s journey.”

Alban Odoulamy has been running Puppet Heaven, or puppet shops by other names, in Crystal City for 18 years, but his heart isn’t in it like it used to be.

Odoulamy emigrated to the U.S. in the mid-1990s from the small, French-speaking West African country of Benin, where he had worked in production and set design for children’s programming for the state-owned television station. He had been formally trained in Marionette puppetry — the puppets controlled by strings — and worked under a master puppeteer until he came here, where he worked as a concierge for Charles E. Smith before its merger with Vornado.

A year after starting his new job in his new country, he saw a vacant shop in a nearby alley and decided to turn it into his own puppet store and workshop, calling it La Marionette. The shop has moved and changed names twice before finding a permanent home in the Shops at 1750 Crystal Drive, as Puppet Heaven.

Odoulamy is not a shop owner by trade, however. He’s a puppeteer, and he’s done shows around the country — around the world, if you count his home country — but he can’t do them right now.

“I miss the shows,” he said, with the remnants of his French accent still very present in his voice. “Doing them is a full-time job. You have to create your characters, your script and your set. It’s not easy. I was trained to do shows in a studio for television; it’s not like some guy on the street.”

Odoulamy used to have two employees to work the shop while he performed, but business has slowed in recent years. Now, it’s just him, opening the shop at 10:00 a.m. six days a week and closing at 7:00 p.m. (6:00 p.m. on Saturdays).

Odoulamy said he approached Vornado a few years ago and told them he was considering closing his shop. To convince him to stay, he said, they gave the shop a renovation. Plus, he says, his shop now has a legacy of customers since it opened in April 1996.

“Just the other day, I had these 23-year-old girls come in the shop and say ‘hi,'” he said. “I didn’t recognize them, but they told me they were two of the first customers at La Marionette and showed me the picture. I love that.”

Odoulamy is 55 now, and he doesn’t know how much longer he wants to keep the shop, despite his loyalty to Vornado/Charles E. Smith. On the contrary, he cherishes each customer who comes in and wants to buy a puppet for their children or themselves.

“I want to keep the tradition of a puppeteer and keep the art alive,” he said. “Everyone enjoys puppets. People still come in and buy Elmo puppets. Some people come in and see the Lamb Chop and they start crying.”

When he goes home every night — just a few blocks away, since he lives in Crystal City — he’s working on a new show, building a new theater and making new puppets.

“I’ve been doing puppets for 31 years,” he said. “I feel like I want to start over. Parents call me all the time and ask me to do shows and I don’t have time. The show is in my heart now, but I want to do it again.”