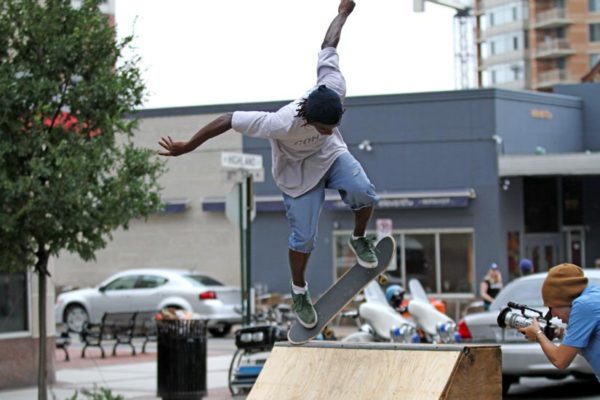 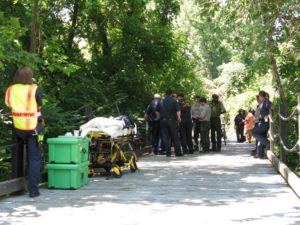 (Updated at 4:30 p.m.) The Arlington County Fire Department is on the scene of a hazardous materials situation near Roosevelt Island.

U.S. Park Police, Arlington County Fire Department, and Alexandria Fire Department all responded when someone called in concerns about an odd smell.  Crews found the small spill in a creek near the entrance to the island and put booms in the water to contain it. Arrangements are being made to reinforce the boom when the tide changes so no containment is lost.

U.S. Park Police spokesman Sgt. David Schlosser says tests are being done on the substance to determine exactly what it is.  Based on the odor, coloration and gelling it is believed to be a petroleum product, possibly a type of diesel fuel.

Nobody was injured from inhaling fumes. Schlosser says it would be very unlikely that this type of product would cause respiratory harm, but workers stationed at the spill are being monitored for any signs of illness.

The National Park Service has arranged for a hazmat mitigation company to clean up the product, but is not sure yet when that team will arrive. Emergency crews will remain at the scene until the clean up is complete.

It’s possible that the bridge connecting Roosevelt Island to the parking lot may have to be shut down temporarily, but for now, pedestrians are being allowed to pass. Investigators are now working to find 0ut who or what spilled the substance. 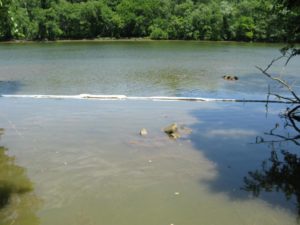 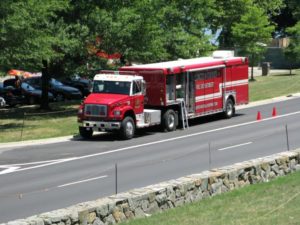 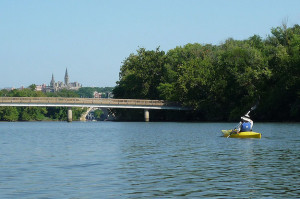 Thanks to shifting political winds and dogged determination, the decades-long quest to get a boathouse built on the Arlington side of the Potomac may finally result in action on the part of the federal government.

The National Park Service is expected to launch an extensive environmental and historical impact study for potential boathouse locations in the next several months, the first step in what is expected to be a lengthy but, at last, finite process.

The impact study would likely wrap up by the end of 2011. If it the boathouse then gets the go-ahead, and if funding can be secured for the project, the Park Service would seek bids for the planning, building and daily operation of the boathouse.

In other words, don’t hold your breath.

“We’re still a very, very long way away from the finish line, even if it is approved,” said Brian Stout, Arlington County’s federal government liaison. “There will be a lot of issues for them to study.”

The Park Service is a central player in the boathouse process because it controls most of the riverfront land in Arlington County. The Park Service would be responsible for building and running the boathouse, but county leaders hope the agency would allow “robust community and public access” to the facility. Among the local groups chomping at the bit for a new boathouse are Arlington’s three public high school rowing teams (Yorktown, Washington-Lee and Wakefield), which currently pay for access to crowded boating facilities in the District.

Stout says the county hopes the Park Service would choose to build the boathouse just north the the Roosevelt Island parking lot, near the pedestrian access from the Mount Vernon Trail to Key Bridge. That part of the river is uniquely suited for rowing facilities, he said.

END_OF_DOCUMENT_TOKEN_TO_BE_REPLACED 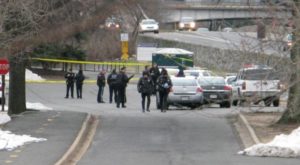 U.S. Park Police have cordoned off the section of the Mt. Vernon Trail that runs through the Roosevelt Island parking lot due to a death investigation.

Preliminary reports suggest the victim committed suicide with a firearm. Right now it’s unclear whether anybody who was on the busy stretch of trail at the time witnessed the shooting.

The deceased individual’s identity has not been released.