Arlington County has not ruled out the possibility of a permanent roundabout on Military Road despite the confusion a temporary version has caused for the past year.

In October 2021, where there used to be a stop sign for traffic on northbound Military Road, the county added paint lines, bollards and raised temporary curbs, and partially demolished a median. The work was aimed at improving safety where Military Road intersects with Nelly Custis Drive.

While preliminary data from the county found the roundabout did lower speeds, 53% of drivers, 27% of pedestrians and 26% of cyclists said they felt “less safe” or “much less safe” using the new traffic pattern, per a summary of feedback collected this summer.

“The majority of all respondents reported feeling less safe while using the pilot intersection, but the margins were very narrow for those who walked or biked through the intersection,” the report says. “Those who reported feeling less safe highlighted concerns with operational confusion, the size of the pilot roundabout and the perceived lack of sufficient space for a well-designed roundabout in the future condition.”

Drivers said they were confused about proper procedure in the intersection, while cyclists said drivers exhibited inconsistent behavior and would revert to habits they had when the intersection had a stop sign, per the report. Additionally, several users said the temporary materials caused visual challenges that contributed to the confusion.

About 31% of drivers, 26% of pedestrians and 18% of cyclists said they felt “safer” or “much safer” with the traffic circle, the summary says.

Road users in this camp were also concerned about confusion, but “reported better yield rates by vehicles to pedestrians, slower vehicle speeds, and easier operations for traffic flow and left turns from Military to Military,” the report said.

For now, it seems the roundabout is still in play as a permanent change.

The report says that the project can “take the form of either a signalized intersection or a roundabout” and that a majority of issues locals raised “can be addressed through design in a capital project, where the intersection design will not be limited by existing curb lines.”

Meanwhile, the Old Glebe Civic Association, which previously called the changes “unwanted” and says it has opposed the potential project for four years, says it has sources claiming the roundabout is all but a done deal.

“Two County staff members recently stated that the County will be building a permanent roundabout, which will take about 12 to 15 months, independent of the public feedback,” writes Peter Jaffe in the October edition of OGCA’s newsletter. “They said that the permanent roundabout will be larger than the temporary one and that the increased size will help address confusion by drivers about who is in the roundabout and who has the right of way.”

The report notes that recently, signs in the middle of the roundabout “have been knocked down and later repaired at least twice, suggesting that incidents have occurred at the roundabout.” The Old Glebe neighborhood is about 2 miles west of the roundabout, but Military Road is a popular commuter route for those heading east.

In response to OGCA’s letter, Dept. of Environmental Services spokeswoman Claudia Pors tells ARLnow there is no official recommendation yet.

“The County has not shared any recommendation or decision for the Military Road and Nelly Custis Roundabout Pilot Project at this time,” she said.

As for the signage, she said the team at DES is aware of the issue.

“Throughout the pilot’s duration, signage has been knocked over,” she said. “Staff has repaired or replaced these signs as soon as possible. We do not have information on the exact causes of these incidents or how many times they occurred.”

END_OF_DOCUMENT_TOKEN_TO_BE_REPLACED

A temporary roundabout along Military Road has garnered strong feelings as a deadline for community feedback nears.

The pilot project at Military Road and Nelly Custis Drive launched in October, with bollards in place to direct traffic around the center, and has reduced speeds on all approaches, according to data the county recently released. Benefits to pedestrians are less clear, as vehicle rates were varied and there were small sample sizes for pedestrian crossings.

The data collected on the roundabout’s use will be considered, as well as community feedback — which is being collected through this coming Monday, June 6 — when the county decides in October whether to make the roundabout permanent or to configure an intersection with a stop light instead.

More than 100 comments flooded a Nextdoor post that outlined takeaways from a community meeting last month on the pilot.

“By my observation, all but one or two of the citizens present were opposed to the roundabout at the intersection of Military Road and Nelly Custis Drive,” one user wrote about a recent meeting on the roundabout. “The bottom line is that the County is dead set on ‘re-engineering’ that intersection. Returning the intersection to the way it was for 50+ years was not even contemplated, and it either will have a permanent roundabout or a three-way traffic signal.”

Another resident said “this roundabout is absolutely a solution looking for a problem.”

The Nelly Custis Drive intersection was identified in the county’s Vision Zero action plan as a location for improvements to increase safety for pedestrians and bicyclists. The roundabout is supposed to increase allow more vehicle traffic, shorten crossing distances for people walking through the intersection, provide predictable turning movements and reduce vehicle speeding.

The Old Glebe Civic Association, which is located well to the north of the roundabout but along the commuter route of Military Road, has long fought against the pilot, saying the changes were unwarranted and there were no significant safety concerns at the intersection.

“Detractors contend that the new pattern has generated confusion and near-accidents, that it is difficult to navigate, and that the required merging of auto and cyclist traffic is particularly dangerous and difficult for cyclists… OGCA pledges continued opposition to the roundabout,” the association wrote in an April newsletter.

Prior to the pilot, Nelly Custis Drive met Military Road at the intersection in a T-shape, with a stop sign for traffic on northbound Military Road.

The OGCA previously said three crashes occurred over eight years, including two involving bicycles, out of the approximately 32 million vehicles that passed through the intersection during that period.

Per Arlington’s Dept. of Environmental Services data, about 11,000 vehicles pass through the intersection daily. In a presentation last summer, county staff said conversions to roundabouts reduce pedestrian crashes by 27%, while conversions from stop-controlled intersections reduce injury crashes by 82%.

END_OF_DOCUMENT_TOKEN_TO_BE_REPLACED

(Updated at 1:30 p.m.) There’s a new temporary traffic circle along Military Road aimed at improving safety where it intersects with Nelly Custis Drive.

Where there used to be a stop sign for traffic on northbound Military Road, the county has added paint lines, bollards and raised temporary curbs, and partially demolished a median. The work was completed Saturday, according to a spokesman with the Arlington Department of Environmental Services.

The one-lane roundabout at the intersection in the Donaldson Run neighborhood was completed after the county resurfaced Nelly Custis Drive as part of its annual street maintenance program.

“This pilot project, in conjunction with the Vision Zero transportation safety program, will test the effectiveness of a roundabout for improving pedestrian safety and reducing vehicle speeding at the intersection,” according to the county. “It will be in place for one year to allow data collection of real-world conditions, and since it’s temporary, it can be adjusted as needed or removed easily if it doesn’t work.”

The county will study traffic patterns to determine whether to keep the roundabout or install a lighted intersection, per a county webpage on the project.

Some neighbors are displeased with the new traffic configuration. An October newsletter from the Old Glebe Civic Association called the changes “unwanted.”

The civic association said it has repeatedly expressed its opposition to the potential project for four years, and it would like to see the old traffic pattern restored after the study.

“OGCA pledges continued opposition to the roundabout,” it said. “Other civic associations have concurred with OGCA that the project is overly expensive, will not improve traffic safety, and will unnecessarily slow movement along Military Road.”

But OGCA argues that crash data for the intersection doesn’t merit the change.

“In August, OGCA argued that the… construction cost was unjustified given little evidence of any safety concerns,” the newsletter continues. “Only three accidents have occurred over the past eight years (two involving bicycles) out of the approximately 32 million vehicles that passed through the intersection during that period. Our letter also said removal of the stop sign and bike lane increases danger for pedestrians — particularly school children during morning rush hour — and also for bicyclists.”

Bike lanes were converted to “sharrows,” or arrows reminding drivers to share the road with cyclists, per a planning document.

This is the last of three intersections — including those at Marcey Road and 36th Road N. — to be changed as part of a project aimed at improving safety along Military Road.

“These intersections were identified in a 2004 Arterial Transportation Management Study that suggested several recommendations to improve safety for all modes of transportation in the Military Road corridor,” according to DES.

Some local residents said in public comments that they supported the roundabout.

“As 25-year residents who live one block from this intersection and who walk, ride bikes, commute, and use the ART bus, we believe that a safer solution is needed due to excessive speed; drivers who fail to yield to pedestrians; and increased traffic volume,” said one couple.

The county website says the key takeaways for traveling through a roundabout are: 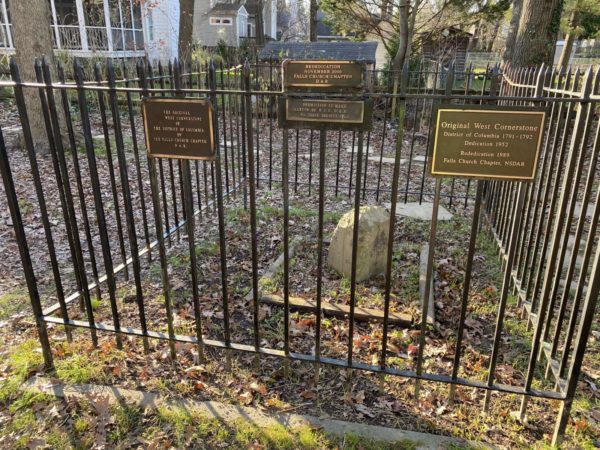 Local Unemployment Rate Improves — “Arlington’s jobless rate continued to improve in October… the county’s unemployment rate of 4.1 percent in October represented a decline from 4.5 percent in September, according to data reported Dec. 3 by the Virginia Employment Commission. Despite the improvement, the county’s jobless picture has significant more room for recovery. A year ago, the jobless rate stood at a rock-bottom 1.7 percent.” [InsideNova]

Custis Trail Roundabout ‘Fully Open’ — “The Custis Trail has reopened under I-66 near Arlington’s Bon Air Park as overhead work on I-66 progresses for VDOT’s Transform 66 Inside the Beltway Eastbound Widening Project. With the underpass re-opened, the new trail roundabout is fully open and the detour is no longer needed… Lighting is planned to be installed in early 2021.” [VDOT]

New Pedestrian Beacons in Bluemont — “Happy to see this safety improvement in the Bluemont neighborhood… rectangular rapid flash beacons have been added on Wilson near Safeway. So, a light now flashes when you’re trying to cross. Makes a big difference!” [Twitter]

Tiny Glass Houses at Ambar — At Ambar (2901 Wilson Blvd) in Clarendon, “guests can now reserve one of the 10 fully enclosed new glass tiny houses, that can seat up to six people for dining in warmth, safety, and privacy. They are totally self-contained, with heat, lighting elements and music selections for each host’s personal preference while dining at Ambar.” [Press Release]