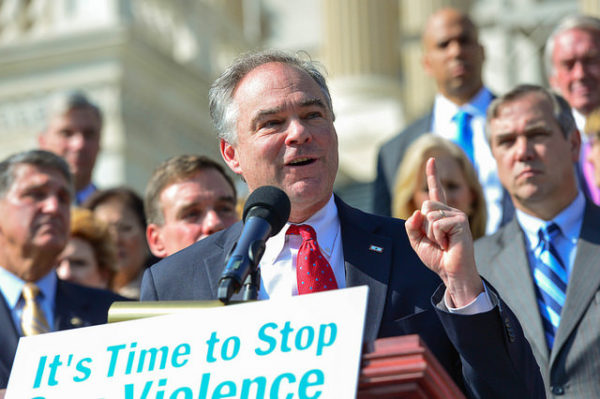 Sen. Tim Kaine (D-Va.) is calling the bipartisan budget deal, which passed early Friday morning after a five-hour government shutdown, “good for the country and good for Virginia.”

The deal, which adds billions of dollars in federal spending for military, disaster relief, and domestic programs, comes weeks after a historic package of tax cuts championed by President Trump and the GOP was signed into law.

Kaine is touting several portions of the spending bill as Virginian victories, such as the $3 billion for 2018 and 2019, respectively, that the budget sets aside to tackle the national substance abuse epidemic. The Children’s Health Insurance Program (CHIP) has been funded for an additional four years, which a press release from the Senator’s office states will benefit 66,000 Virginian children.

A two year funding extension of federally-qualified community healthy centers was included in the spending bill. The Senator’s press release states that “approximately 300,000 Virginians receive health care at more than 100 community health center locations in underserved communities” across the state.

“I am proud to have worked with a bipartisan group of my colleagues last month on negotiations to reopen the government that led us toward this deal, but our work isn’t done. We now must build on this bipartisan progress and immediately proceed to debate and pass legislation that permanently protects Dreamers,” stated a press release quoting Kaine.

Other Virginia “wins” cited by Kaine, via press release, include: 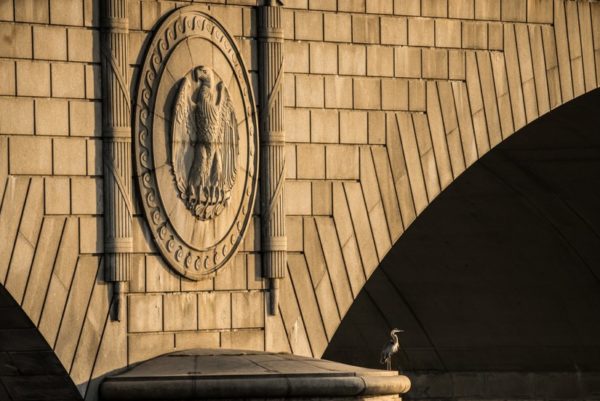 Arlington Inmate Dies — A 48-year-old convict died early Saturday morning in the Arlington County Detention Facility in Courthouse. The man, who had a “history of medical issues,” was found unresponsive in his cell and rushed to the hospital, where he was pronounced dead. [Arlington County]

More Sequestration Could Hit Virginia Hard — Virginia, and in particular Northern Virginia, is bracing for more sequestration cuts to the Defense Department, which are set to take effect in five weeks. Virginia’s two U.S. Senators are pushing for new budget legislation to replace the sequester. [Washington Post]

Arlington Company Makes Fortune List — Courthouse-based Opower has made Fortune Magazine’s inaugural “Change The World” list. Opower is ranked No. 45 on the list of 51 companies “that have made a sizable impact on major global social or environmental problems as part of their competitive strategy.” How long Opower remains in Arlington remains a question: the company is currently considering a move to the District. [Fortune]

The county will tap into the $3 million Economic Stability Fund it established to lessen the sequestration’s impact on the community. The County Board voted on Saturday to send $39,000 from the fund to the Department of Human Services for its Homelessness Prevention and Rapid Re-Housing Program (HPRP) program.

The Board voted to tap into the fund for the first time after learning of cuts to federal Housing and Urban Development (HUD) funding, which would trickle down to the local level. The Virginia Department of Social Services informed the county its contribution would be reduced by $39,000 in FY 2014 due to cuts in the state HPRP funding, which originates at HUD.

“This is the first time the County has had to tap into its sequestration fund, but unfortunately, we are quite certain it will not be the last,” said Arlington County Board Chairman J. Walter Tejada. “Across the nation, communities are feeling the impact of sequestration. These indiscriminate cuts are affecting the lives of real people, in large and small ways, and that impact is only going to grow as time goes on. In this instance, we are able to use the special funds to continue important safety net services for some of our most vulnerable individuals and families.”

HPRP has been in existence since 2009 and receives funding through a combination of $249,000 of state money to support case management, and $200,000 of local money to support housing-related financial assistance. Four non-profits provide case management services: Arlington Street People’s Assistance Network, Doorways for Women and Families, the Arlington Alexandria Coalition for the Homeless and Volunteers of America-Chesapeake.

Individuals and families who are homeless or at risk of becoming homeless can qualify for short term financial assistance from HPRP. Participating families are limited to $1,200 for homelessness prevention and $3,000 for rapid re-housing. Participants also receive case management services such as guidance for developing household budgets and maintaining their housing.

So far, county staff has not identified any other sequester cuts that would require a dip into the reserve fund. Although the state has experienced some cuts it hasn’t yet passed those on to localities.

Suspicious Package Shuts Down Va. Square Metro — A suspicious package shut down the Virginia Square Metro station yesterday for part of the evening rush hour. The package was determined to be non-hazardous, according to police.

Sequester Could Be Costly for County — The federal budget sequester, set to take effect tomorrow, could cost Arlington County government between $2 and $3 million in direct federal aid. [Sun Gazette]

Support Website for Arlingtonian Accused of Murder — A support website has been set up for Chris Deedy, an Arlington resident and State Department security agent who is accused of second degree murder in the 2011 shooting of a man in McDonald’s restaurant in Hawaii. Deedy’s lawyer says his client was protecting others when he fatally shot the 23-year-old Hawaiian. “Law enforcement officers shouldn’t be treated like murderers when they protect the public,” says the website. [DeedySupport.com]

Interview with Kanninen — The Democratic website Blue Virginia interviewed Barbara Kanninen, who’s running for the Democratic endorsement for Arlington School Board against incumbent James Lander. Asked why she’s running, Kanninen said: “If we don’t have competition, we don’t have anyone even trying to prove that they’re going to be a good School Board member.” [Blue Virginia]

Moran asked McDonnell use his position in the Republican party to pressure GOP congressional leaders to support a “balanced approach to deficit reduction” that could avoid sequestration. Murray has responded with a statement criticizing Moran’s leadership on the issue.

For months and months, Jim Moran has done exactly nothing while this debacle unfolded. Moran offered no legislation and he refused to sign on to existing legislation. He didn’t even bother to have a town hall meeting to inform his constituents about how heavily we are about to be impacted.

Moran’s only recommendation is to raise taxes on the middle class at the end of the year, a tax increase of almost $3 trillion that would impact 83% of American households.

We expect our elected representatives to put people over partisanship and to find solutions to problems, not to complain and point fingers. Instead of Moran’s angry hyper-partisanship, we need a congressman who will work across the aisle and put the people of the 8th District first. Instead of political posturing, I’ll stand up for the workers of the 8th District and not let petty politics stand in the way of meaningful legislation.

Three Democratic members of Congress from northern Virginia, including Rep. Jim Moran, have sent a letter to Gov. Bob McDonnell (R) in support of avoiding the “economic disaster” of sequestration through a “balanced approach to deficit reduction.”

Sequestration could cost Virginia 207,000 jobs and $20.9 billion in lost economic activity, according to one economist.

Congressmen Jim Moran (VA-08), Gerry Connolly (VA-11), and Bobby Scott (VA-03) wrote to Governor Bob McDonnell today detailing the impact sequestration cuts would have on Virginia families and urging Gov. McDonnell to use his leadership position in the national Republican Party to prod House Speaker John Boehner and Majority Leader Eric Cantor “to begin discussions on a balanced deficit reduction package that can garner bipartisan support” and avoid an economic disaster for the Commonwealth.

The Virginia lawmakers were responding to McDonnell’s October 9 letter urging President Obama and the Virginia Congressional delegation to support a House Republican “cuts-only” plan that would shift all defense cuts to safety-net domestic programs. “We were puzzled by your recent letter to the President and congressional delegation urging support for the cuts-only approach,” the three Democratic lawmakers wrote. “Your concerns about the impact on Virginia of a sequester to defense spending, which we share, applies almost equally to nondefense discretionary spending, to which your letter is silent.”

The lawmakers questioned Governor McDonnell’s support of the “Sequester Replacement Reconciliation Act” (H.R. 5652) passed by the House on May 10 on a party line vote. The legislation would prevent the sequestration cuts to defense programs by cutting an additional $300 billion over the next 10 years from safety net programs like Medicare, SNAP (food stamps), and non-profit health clinics providing preventive services. The bill also requires all current and future federal workers to pay an additional 5 percent of their salary toward their federal pensions. “Contrary to its title, this bill does not avert sequestration, instead shifting cuts to safety-net domestic programs in the early years and leaving the door open to across-the-board cuts in later years.”

Along with the defense cuts and their impact on Virginia’s federal contracting sector, sequestration could trigger massive layoffs in the federal workforce, and would result in fewer air traffic controllers, border guards, food inspectors, and cuts to public safety and nearly every other government function. The House Republican bill advanced by McDonnell would only make those cuts more severe since it contains no balance of new revenue.

Ironically, in 2011, Governor McDonnell wrote the Virginia delegation calling for a bipartisan solution with all options, including revenue, on the table. The cuts-only approach advocated by Governor McDonnell in his October letter departs from his previous bipartisan approach. “Last year…we applauded your initiative. We hope you will join us in calling on Speaker Boehner and Majority Leader Cantor to begin discussions on a balanced deficit reduction package that can garner bipartisan support. We stand ready to work with you to achieve a balanced solution that delivers on the tradition of our Commonwealth,” Connolly, Moran, and Scott wrote.

Sequestration, which mandates $1.2 trillion in deficit reduction, came about after House Republicans, for the first time in history, refused to support the President’s request for a clean debt limit bill and instead demanded massive cuts. A commission formed in the aftermath failed to reach agreement on the savings when Republicans refused to consider closing tax loopholes, ending unneeded subsidies or any other revenue measures, and walked away from the table.

Unless Congress is able to find these savings, on January 2nd, defense spending immediately will be cut by about 10 percent, while non-defense discretionary spending will be cut by roughly 8 percent, and payments to Medicare providers will be cut by two percent – a total reduction in spending of $110 billion for fiscal year 2013.

Connolly, Moran, Scott, and other Democrats in Congress have repeatedly urged the House Republican leadership to cancel the 5-week August recess and the current 7-week recess to bring Congress back to Washington to deal with sequestration and other pressing fiscal matters that expire at the end of the calendar year.

McDonnell Letter of July 2011 from McDonnell to President Obama and Virginia delegation – http://connolly.house.gov/uploads/McDonnell%20to%20President%20on%20debt%20ceiling%2007-20-11.pdf