A man was slashed in the face by a knife-wielding suspect in Ballston this past Saturday night, police say.

The incident happened just before 6 p.m. on the 4000 block of 5th Road N. — a block that includes restaurants, a yoga studio, a towing lot and the rear of a Mercedes-Benz dealership.

Police say the victim suffered a non-life-threatening cut to the face and the suspect was taken into custody. The motive for the alleged crime is unclear.

“The suspect was consuming alcohol prior to the incident,” said Arlington County Police Department spokeswoman Ashley Savage. “What preceded the incident remains under investigation.”

MALICIOUS WOUNDING, 2017-08260207, 4000 block of 5th Road N. At approximately 5:58 p.m. on August 26, officers responded to a report of a stabbing. Upon arrival it was determined that a known suspect struck the victim in the face, causing a laceration. The victim was transported to Virginia Hospital Center with non-life threatening injuries. Jeffery Warren, 55, of Stafford, VA was arrested and charged with Malicious Wounding and held with no bond.

Also in the crime report, a man has been charged with aggravated sexual battery after allegedly “playing with children in an inappropriate way” in the Aurora Highlands neighborhood.

AGGRAVATED SEXUAL BATTERY, 2017-08230184, 2700 block of S. Fern Street. At approximately 3:20 p.m. on August 23, police responded to the report of a suspicious person. Upon arrival, police met with a female victim who observed the male suspect playing with children in an inappropriate way. During the course of the investigation, it was determined that the suspect touched two minor females in a sexual manner. Marlon Cardona-Orellana, 38, of Arlington, VA was arrested and charged with two counts of aggravated sexual battery.

The rest of this past week’s crime report highlights, including some that we’ve already reported, after the jump.

END_OF_DOCUMENT_TOKEN_TO_BE_REPLACED 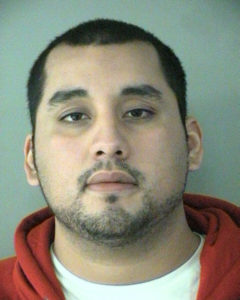 A police tip earlier this month led to the arrest of a man suspected of slashing another man in the face after an argument last June, police announced this morning.

According to the authorities, a tip received through Arlington County Crime Solvers led to the arrest of 24-year-old Ramon Calderon on April 14.

Calderon is suspected of brandishing a pocket knife, then cutting another man across the face at the Gunston Middle School soccer fields in June. The attack caused “a fairly large laceration,” on the victim’s face according to police, and resulted in significant bleeding due to a cut minor artery. The man was rushed to George Washington University Hospital, where he received 60 stitches.

Police said last June that the two men were arguing about the “worth and importance of a college education” before the attack, but they did not specify whether the suspect was arguing for or against the value of higher education.

An argument between two men about the value of a college education ended with one of the men being slashed across the face.

The malicious wounding incident happened Friday night around 8:30 at the Gunston Middle School soccer fields. Police say two men were having a verbal argument when one of them brandished a pocket knife and cut the victim across the face, from the corner of the mouth to the ear.

The slash caused “a fairly large laceration,” according to police, and resulted in significant bleeding due to a cut minor artery. The victim was rushed to George Washington University Hospital, where he received 60 stitches.

The suspect fled the scene and the investigation “is ongoing.” The suspect is described as a Hispanic male, about 6’3″ and 220 lbs. At the time of the incident was wearing a pink Nike polo shirt and blue jeans, police say.

The argument started when the men began debating the “worth and importance of a college education,” police say. The suspect became angry during the argument, at which point he pulled out the pocket knife. A crime report did not specify whether the suspect was arguing for or against the value of higher education.