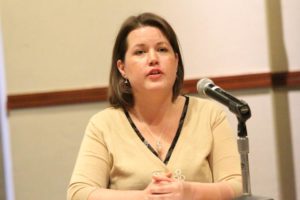 Earlier this week, we asked the two Democratic candidates for the 49th District House of Delegates seat to write a sub-750 word essay on why the district’s residents should vote for them.

Here is the unedited response from Stephanie Clifford:

I have lived in Virginia’s 49th District for nearly a decade and am a proud member of this community. I am a mother, small business owner, and a proud Democrat. I am running for the House of Delegates because I care deeply about our community, and I want to ensure that our shared community values continue to be heard in Richmond.

When meeting with members of our community about the needs of our district, we’ve talked about many issues that affect us, including:

The Columbia Pike corridor is the most heavily traveled bus route in Virginia, and is at the heart of our district. As your delegate, I will ensure that the voices of this district’s residents are heard when it comes to projects like the proposed Columbia Pike Streetcar.  Our community will benefit from increased development, but it should not come at the expense of losing the diversity that makes this district a great place to live.

A well-funded public transportation system is the key to smart growth and better jobs for our district.  Smart growth will benefit our community by putting in place environmentally friendly policies which address air quality, energy usage, and runoff into our waterways. Virginia must be a leader in this area, and as your delegate, I will continue to identify hazards to our health, and work to improve our environment for our community.

Today Virginia ranks in the bottom half of the country in terms of access to universal Pre-K education for children. In order to attract and maintain quality jobs and a strong economy, we must have a workforce that is better-educated than that of our competitors.  When the Kaine administration abolished the estate tax, Pre-K education felt the pinch and has suffered from underfunding ever since.  As your delegate, I will fight for the reinstatement of the estate tax to help pay for this very important program.

My candidacy is as much about people as it is about policies. A primary reason for my entering the race was that I witnessed LGBT individuals and families, including close friends of mine and many members of our district, being treated as second-class citizens due to Virginia’s discriminatory laws.

END_OF_DOCUMENT_TOKEN_TO_BE_REPLACED 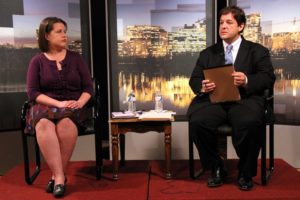 With no Republican contenders in the race, the Democratic primary for the 49th District House of Delegates seat will almost certainly decide who will represent the South Arlington district for the next two years.

When comparing the two candidates, however, one realizes that they are nearly identical on the issues. Both Stephanie Clifford and Alfonso Lopez say they will bring their “progressive values” to Richmond but will work with lawmakers across the aisle, both are pro-choice and pro-LGBT equality, both support increasing funding for Pre-K education and transit, and both oppose off-shore oil drilling.

“It’s obvious, we are pretty much exactly alike on the issues,” Clifford acknowledged recently. “There’s not a lot of daylight between us, we will vote the same way much of the time, which is why… personality issues are so much more important in this race.”

Those personality differences became a bit more clear earlier this week during a live televised debate sponsored by ARLnow.com and Arlington Independent Media. Asked about the one thing that most separates them from their opponent, Lopez and Clifford had two very different answers. 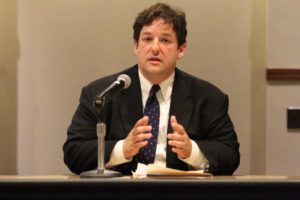 “I think it comes down to experience,” said Lopez, whose resume includes time as an Obama administration appointee in the Small Business Administration, an appointee with the administration of Virginia Gov. Tim Kaine, an environmental policy advocate and a leader of local Democratic organizations.

“I’ve been working on these issues that matter to the 49th District for about 20 years,” he said. “It’s not just about building coalitions… it’s having the history, having the years of experience, and knowing the people in Richmond already. I’ve put in the time, I know how to get things done.”

Lopez added that the long list of endorsements he has received shows that he’s ready to go to Richmond.

Clifford, 34, said that while she doesn’t have the experience of Lopez, she has other qualities that make her the best choice for the Democratic nomination.

“I absolutely believe I bring that strong work ethic, the temperment and the perspective that we need to have a very effective delegate, to get down there and work for the real results we need,” she said.

“I’ve walked the entire district twice. I’ve talked to people over and over again about these fundemental issues. People are worried about housing, they’re worried about the education that their kids are receiving, they want to be able to afford to live here,” Clifford said. “People need help, and that’s why I’m stepping up.”

END_OF_DOCUMENT_TOKEN_TO_BE_REPLACED

ARLnow.com and Arlington Independent Media will be sponsoring a debate between the two Democrats running for the 49th District House of Delegates seat next week.

Alfonso Lopez and Stephanie Clifford will face off on live TV (Comcast channel 69 and Verizon channel 38) from 7:30 to 8:30 p.m. on Monday, Aug. 8. The public is encouraged to watch on TV, on the internet or live in-studio. The debate will be held at the AIM studios at 2701 Wilson Blvd #C.

We’ll be asking about 10 questions of the candidates. If there’s a question you want answered, please let us know in the comments.

The 49th District, currently represented by Del. Adam Ebbin, includes much of South Arlington. Ebbin, a Democrat, is running for state Senate.

This year’s primary will be held on Aug. 23.