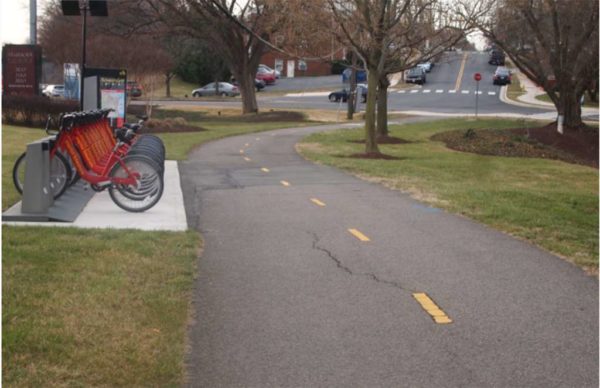 (Updated at 12:22 a.m.) Arlington County is set to celebrate the opening of a new section of the Washington Blvd Bike Trail today (Nov. 30).

The event will take place from 1 p.m. to 2 p.m. along the new bike trail on the east side of Towers Park (801 S. Scott Street). Capital Bikeshare bikes will be available for attendees to try out the trail after remarks from the speakers.

Construction on the trail began in January. Work zipped along over the last few months to complete it before the end of fall.

The new 10-foot-wide trail runs between Towers Park and 2nd Street S. in Penrose, to provide more seamless access for cyclists and pedestrians to a previously constructed trail between Arlington Blvd and Walter Reed Drive.

This story has been updated

Work is speeding ahead on a new bike trail running alongside Washington Blvd as it meets I-395, with construction set to wrap up this fall.

The county has spent close to a year constructing a new 10-foot-wide trail as the road runs between Towers Park (801 S. Scott Street) and 2nd Street S. in Penrose, in a bid to provide more seamless access for cyclists and pedestrians to a previously constructed trail between Arlington Blvd and Walter Reed Drive.

Over the course of the last month, the county says workers have finished “two sections of retaining wall” and the “installation of the abutments for the bridge over the Doctor’s Run stream,” as well as the construction of some storm drains.

Now, work will shift onto property owned by the U.S. Navy at 701 S. Courthouse Road, just near Towers Park, as workers install the trail’s stone and asphalt base.

The county hopes to have work wrapped up by sometime in the “late fall.” In the meantime, some construction will continue along Washington Blvd. More details from the county’s website:

Arlington County is set to add a new section of bicycle and pedestrian trail along Washington Blvd.

The project proposes to construct a 10-foot wide paved trail on the western side of Washington Blvd. The trail will be mostly located in the road’s existing right-of-way, but also runs through the U.S. Navy Supply Facility (701 S. Courthouse Road) and Towers Park.

County staff moved the northern section of the trail onto the shoulder of Washington Blvd to reduce the need to build retaining walls and reduce the number of trees to be cut down. Under the current plan, about 84 trees would be removed and as many as 160 replanted after the project is complete.

“The project will serve as a valuable link in the overall trail network as it provides a north-south trail between the Columbia Pike (Towers Park) area and the Arlington Blvd Trail,” county staff wrote in a report endorsing the plan. “Recent improvements to the trails along Arlington Blvd will now be more accessible via this new Washington Blvd trail.”

In a letter to the County Board on September 6, Penrose Neighborhood Association president Maria “Pete” Durgan said members “wholeheartedly support” the project.

The county budgeted just over $2.1 million for the project, with just over $420,000 as contingent in case of change orders. Construction is expected to begin this winter and wrap up late next year.

Code Orange Air Quality — Hot and unhealthy air is in the forecast today. Code Orange air quality is expected today through Friday, meaning that pollution levels could be harmful to children, the elderly, or people with health problems. On this hazy and humid day, the heat index could reach as high as 107 degrees. [WJLA]

Yorktown Running Back Commits to UNC — Star Yorktown running back M.J. Stewart will play Division I football at the University of North Carolina. Stewart, a rising senior, will still play at Yorktown this fall. [Sun Gazette]

Towers Park, at 801 S. Scott Street near Columbia Pike, is in line for a $1.3 million facelift, complete with a new basketball court, new tennis courts and practice courts and a state-of-the-art lighting upgrade.

The County Board is expected to approve the construction contract for the project at its meeting this coming Saturday, when the item is on Board’s consent agenda, which is intended for non-controversial items. Once the contract is signed, county staff estimates the construction will take seven months.

The lighted facility, which features four tennis courts, two practice courts, a basketball court and a sizable dog park, has severe heaving and deep cracking throughout the court surfaces and it is served by obsolete lighting fixtures,” the staff report states when justifying the need for the improvements.

The design originally called for the two practice tennis courts to be relocated and four trees to be removed, but, after the county’s parks staff met with the Penrose Civic Association and the Arlington Tennis Association, the practice courts were moved back to their current location in the plan.

The courts — both basketball and tennis — are popular spots for league play and drop-in games, so while construction is going on, athletes looking for a game will have to go elsewhere before the opening of the new facility, likely in the spring of 2014.