Pole Finally Removed from Pike — From Arlington’s Dept. of Environmental Services: “That utility pole awkwardly lingering in the intersection of Columbia Pike and S Frederick Street has been removed. Good night for a cozy fire.” [Twitter]

Men at Memorial Still a Jan. 6 Mystery — “A few months after the Capitol attack, in March 2021, ARLnow published a story that featured several of Westcott’s photos with the faces of the men blurred out. Westcott was also in touch with some of the online sleuths investigating the Capitol attack, but nothing emerged that definitively identified the men or linked them to the broader Oath Keepers conspiracy, or figured out precisely how they fit into the puzzle.” [Huffpost]

The lonely utility pole protruding into a Columbia Pike intersection has not come down yet, the county confirms, despite assurances it was going to by the end of last year.

In September, ARLnow learned that an errant utility pole sitting a few feet from the sidewalk at the intersection of Columbia Pike and S. Frederick Street was scheduled to be removed. But that has yet to happen, due to at least one utility company not completing work to bury wires as part of the Columbia Pike multimodal project.

The update on the website was made shortly after ARLnow reached out for more information based on a reader tip that the pole was still there.

There’s no timeline as to when the pole will be removed, a county spokesperson tells us.

The work may eventually result in the temporary closure of Columbia Pike lanes between the Arlington/Fairfax County line and the Four Mile Run Bridge during construction hours, they note.

In the fall of 2020, a traffic signal was installed at the intersection of S. Frederick Street and Columbia Pike near Arlington Mill. It was in response to a years-long request from residents and advocates to improve the intersection’s safety, which had seen a number of crashes and accidents over the years, including some involving pedestrians.

As part of that construction, the driveway to Arbor Heights — an affordable housing complex with an entrance right off Columbia Pike — was redone to align with S. Frederick Street. Previously, a cement island with a strip of sidewalk held the pole but that island was removed, leaving the pole all alone.

It’s surrounded by bollards and, though the county says it hasn’t received any complaints about it blocking or being dangerous to traffic, ARLnow has received several notes about it from concerned motorists.

A new underground duct bank was built and the utility companies are using it to bury the lines.

All of the ongoing work is part of the Columbia Pike multimodal street improvements project, which extends from the Arlington/Fairfax County line to S. Joyce Street in Pentagon City.

The goal is to “make Columbia Pike a safer, more accessible route for all users” as well as to transform “this main thoroughfare into a complete street that balances all modes of travel and supports high-quality, high-frequency transit service.” 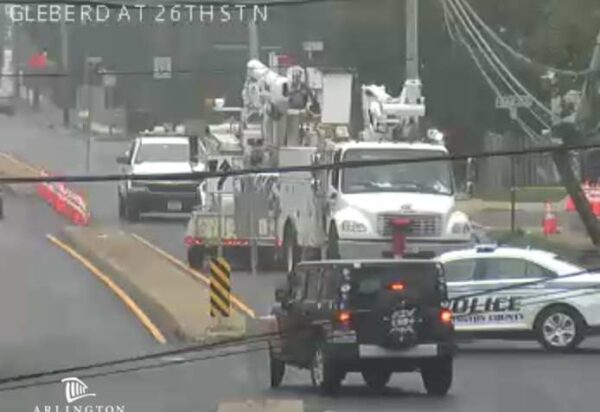 (Updated at 9:50 a.m.) All lanes of N. Glebe Road were closed at 24th Road N., between Langston Blvd and Marymount University, due to a reported crash this morning.

Arlington Alert reported the crash and closure shortly after 7 a.m. Since then, the northbound lanes have reopened while the southbound lanes remain closed.

It appears that the crash took out a utility pole. Repair crews are on the scene.

A lonely utility pole protruding into the intersection of Columbia Pike and S. Frederick Street is expected to come down by the end of the year, a county official tells ARLnow.

Last fall, a permanent traffic signal was installed at the intersection of S. Frederick Street and Columbia Pike near Arlington Mill. The work was part of the Columbia Pike Multimodal Street Improvements project to make the thoroughfare more friendly to all users.

It was also in response to a long-time request from residents and advocates to improve the safety of the intersection, which had become notorious for crashes and accidents, some involving pedestrians.

Along with the new traffic signals, the driveway to Arbor Heights — an affordable housing complex with an entrance right off Columbia Pike — was rebuilt to align with S. Frederick Street, Department of Environmental Services spokesman Eric Balliet said. The previous horseshoe driveway had a cement island with a strip of sidewalk and the utility pole. The island was removed, leaving the errant utility pole, which now sits several feet from the sidewalk in the road.

The pole is surrounded by bollards and Balliet said the county has not received any complaints about it being dangerous or blocking traffic. ARLnow did receive a tip about it from a concerned motorist, however.

That pole is coming down soon as utilities move underground, he says. A new underground duct bank was built as part of the street improvement project and the utility companies will use it to bury their lines.

Most of the lines could be taken underground by the end of the month, according to the project’s most recent update on the website.

Comcast, Dominion Energy and Verizon all have overhead wires on the utility pole at S. Frederick Street and Columbia Pike, a county official confirms.

Comcast has started this process and began removing wires last week, while Dominion also began the switchover last week and is removing its overhead wires this week. Verizon is currently applying for permits, according to the county, and work will begin once those permits are issued.

Once all the companies take down their wires, the pole will be removed.

The entire switchover from overhead to underground wiring and the removal of all utility poles along the Pike from S. Jefferson Street to the Four Mile Run Bridge is expected to be completed by the end of this year.

The outages, roughly centered around Virginia Hospital Center, were reported after the fire department was dispatched to the intersection of N. George Mason Drive and Washington Blvd for a report of a utility pole on fire.

As of 4:30 p.m., Dominion was now reporting about 1,775 customers without electricity as a result of the outage, which extended from the Yorktown neighborhood to the north to the Bluemont neighborhood in the south.

A similar pole fire prompted a fire department response in the Penrose neighborhood on Monday, as seen below.

(Updated at 12:20 p.m.) All lanes of Lee Highway appear to be blocked after a utility pole reportedly snapped and caused wires to fall across the street.

The incident happened around 9 a.m, just east of the East Falls Church neighborhood. The broken pole was not believed to have been caused by a crash, Arlington County Fire Department spokesman Capt. Ben O’Bryant told ARLnow.

A detour is in place between N. Ohio Street and N. Quantico Street, though minor delays should be expected. The detour is expected to remain in place for an extended period of time as utility crews work to repair the pole and downed lines.

Arlington County officials said only the westbound lanes were closed, though photos show the road closed in both directions.

Wow. Now 8 #Verizon trucks and a trailer. NO WAIT another with #Auger arrived replace pole broken years ago and flung across street this morning #LeeHwy closure #Quantico to #Powhatan detour 26th or Washington @ARLnowDOTcom @ArlCoVAPatch pic.twitter.com/Ls40dJB7UT

INCIDENT: Wires down
LOCATION: Lee Hwy at Powhatan St
IMPACT: All lanes WB Lee Hwy will be closed for an unknown amount of time. Detours are in place. pic.twitter.com/3S7HPdMQCd

Power is out in parts of Seven Corners after a truck brought down power lines behind the Eden Center in Falls Church.

The incident happened around 2:30 p.m. in the rear of the shopping center. Two utility poles were snapped in half as a result of the collision.

At one point, nearly 2,500 Dominion customers were without power in the area, including in parts of Arlington County. As of 3:30 p.m. Dominion was no longer reporting any outages in Arlington.

The Arlington County Fire Department responded to the scene for sparking power lines and a spill of mineral oil from the transformers. ACFD has since turned over the scene to Dominion, which will be cleaning up the spill, according to scanner traffic.

Some traffic signals in Seven Corners may be affected by the outages, according to Fairfax County Police.

Nearly 900 Dominion customers are still without power in Arlington as of 5 p.m. Monday, with numerous small outages scattered across the county.

That’s down from more than 6,500 outages last night, after an initial line of 60+ mile per hour wind gusts swept through the area. The strong winds continued through this afternoon but have since died down.

Dominion’s power outage map shows the two biggest power outages are in the Highgate/Colonial Terrace community in the Rosslyn area, and along 26th Street N./31st Street N., near Marymount University, where photos (above and via Twitter) show at least one tree down in the roadway and a power pole snapped in half.

Dominion is estimating that power will be restored by 11 p.m. and 8 p.m., respectively, for each outage.

In all, around 3,000 Dominion customers are still in the dark around Northern Virginia.

Two people were taken to the hospital following a two-vehicle crash in the Yorktown neighborhood this afternoon.

The crash was reported around 1:30 p.m. at the intersection of Yorktown Blvd and N. George Mason Drive.

An elderly male driver was disoriented after the crash and had to be assisted out of his vehicle, according to scanner traffic. He and the other driver, an adult female, were transported to the hospital via ambulance. The injuries were not considered to be serious.

One of the vehicles, a Honda sedan, smashed into a utility pole after the initial crash, shattering the mid-section of the pole and downing numerous utility lines across both roads.

George Mason Drive is blocked at the crash scene, as is Yorktown Blvd east of the intersection.

A car has crashed into a utility pole at the intersection of N. George Mason Drive and Washington Blvd, just down the road from Virginia Hospital Center.

The pole is down and George Mason Drive is blocked, according to scanner traffic. The driver of the car reportedly suffered facial injuries and is being treated by paramedics.

Drivers should expect traffic impacts in the area.

Old Dominion Drive is being shut down in both directions in the area of N. Wakefield Street and Lee Highway due to downed utility lines.

A truck brought down the lines and damaged at least one utility pole in the process.

An extended closure is possible and may make “a mess” of the evening rush hour, according to police radio traffic.

Power pole down on Old Dominion at Lee Hwy in Arlington. @WTOPtraffic pic.twitter.com/xbsVT42AgO