A large tree has fallen across a residential street near Gunston Middle School, bringing down utility lines and damaging a parked car.

The tree fell around noon, amid gusty winds. No injuries were reported.

Numerous crews from Arlington County and Comcast are on scene, preparing to remove the tree and repair the lines and snapped utility poles.

The incident happened around 3:30 p.m., just north of the intersection of N. George Mason Drive and Pershing Drive, in the Buckingham neighborhood.

A driver in a car somehow knocked over a light pole in the center median of George Mason Drive, then drove over a sidewalk and up an embankment before running into a two-story brick apartment building.

The building was not significantly damaged. George Mason Drive was closed while a tow truck driver maneuvered and used a chain to pull the car from the embankment and back onto the street. The road has since reopened.

A second vehicle that was reported to be involved in the crash was pulled over by police one block away from the accident scene.

In a separate incident that happened around the same time, the top of a utility pole with live wires snapped and fell down in the Lyon Village neighborhood, prompting several street closures. From Arlington Alerts:

(Updated at 3:10 p.m.) A car ran into and knocked over a light pole on S. George Mason Drive this afternoon.

The crash involved a single vehicle — a Ford Mustang convertible — and happened around 2:00 p.m. in front of the Army National Guard Readiness Center, near Route 50.

We’re told that the driver suffered minor injuries as a result of the wreck. She was transported via ambulance to a local hospital.

Dominion Power crews are on scene, preparing to assist with the clean-up.

Williamsburg Boulevard is closed between N. Somerset Street and N. Rochester Street due to a school bus that hit a utility pole.

It appears that the top of the bus clipped the pole, which is located directly adjacent to the street. The accident snapped the top of the pole. Dominion Power is responding to the scene to repair the pole and the power lines.

No children were on the Arlington Public Schools bus at the time and no injuries have been reported. No word yet on whether the driver will be cited for the accident.

Williamsburg Boulevard is expected to remain closed for part of the day while Dominion crews repair the lines. Some local power outages are also expected.

All storm warnings and watches have been cancelled in Arlington, but more than a thousand Dominion customers are without power.

A line of storms with strong, gusty winds made a mad dash across the county this afternoon, downing some trees and utility lines but not packing quite the punch that many feared.

Among other reported road hazards, a utility pole was down on Carlin Springs Road just north of Columbia Pike, blocking the road and detouring bus routes. A number of other trees and lines were reported down in various parts of the county.

Some hopeless romantic has stapled a series a posters to utility poles along Lorcom Lane, declaring his or her love for one special lady.

The love letters, which were visible to traffic heading from Spout Run Parkway to Lee Highway yesterday, had messages like “Proud to Be Yours,” “I Love You Forever,” and “The Only Woman In The World For Me.”

One passerby was befuddled by the romantic declarations.

“It’s not even Valentine’s Day,” he observed, scratching his head. On Twitter, there were questions as to whether the posters were a declaration of love or an apology, with one reader using the hashtag “#lovelettersordoghouse.”

Update at 3:15 p.m. — The mystery continues, as the initial claim of credit for the love letters appears to be an hoax perpetrated by an individual who assumed the identity of another person. ARLnow.com apologizes to both named individuals who were falsely identified as the writer and the recipient. 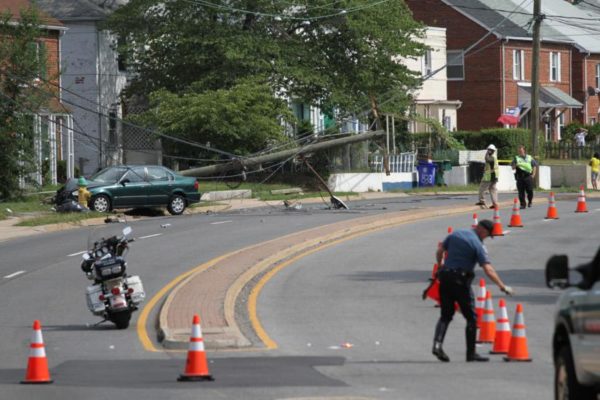 (Updated at 4:15 p.m.) Glebe Road was blocked in both directions in the area of 8th Street S., just north of Columbia Pike, due to an single-vehicle accident around 3:45 this afternoon.

A green Honda sedan collided with a utility pole, knocking the pole and numerous utility lines to the ground. As of 4:15, police had reopened one northbound and one southbound lane of Glebe, but authorities are advising drivers to avoid the area “for the next few hours.”

Metro says buses that use that stretch of Glebe Road may be delayed up to 20 minutes.

Police and Dominion crews remain on the scene. No word on any injuries. 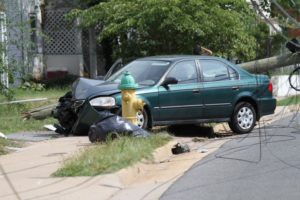 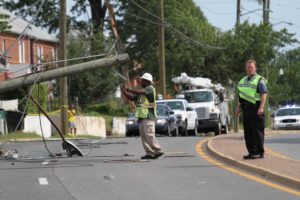 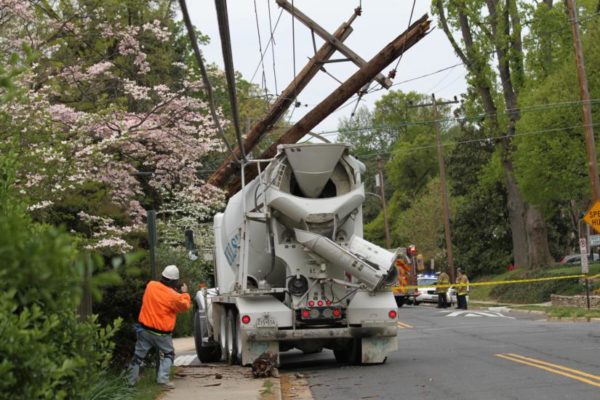 A cement truck backed into a utility pole at the intersection of 16th Street N. and N. Buchanan Street this morning, knocking down power lines and forcing the extended closure of 16th Street.

The incident happened around 9:15 a.m., in the Waycroft-Woodlawn neighborhood. We’re told the cement truck was attempting to back up when it hit the pole, snapping it in two.

16th Street N. is expected to be closed for much of the day as crews from Dominion work to replace the broken poles and downed lines. The closure is several blocks from Virginia Hospital Center.

About 300 homes are expected to be without power until at least late afternoon, while repairs are underway.

South Frederick Street has been shut down between Columbia Pike and 10th Street S. after a truck knocked down a utility pole and became entangled in power lines.

A garbage truck reportedly knocked down the pole just after 3:00 p.m. today. The road will be closed for awhile to allow crews time to clean up the broken pole and a tangle of wires.

Wilson Boulevard has been shut down in the area of North Jackson Street and Washington Boulevard in Clarendon.

A vehicle collided with a utility pole, splitting it in half near the Hess gas station. Dominion is on the scene replacing the pole, which has transformers on it, complicating the process.

No word on when the street will reopen. 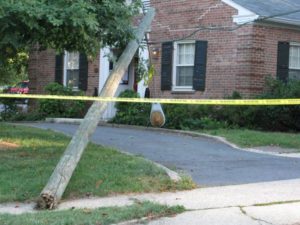 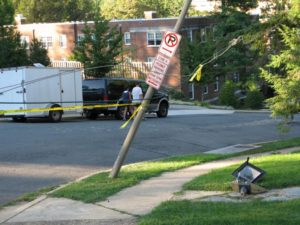 A car apparently crashed into a utility pole next to the Lyon Village Community House this evening, splitting the pole in two and, in a chain reaction, knocking down a street light up the street.

The striking car reportedly took off after the accident.

The wires that fell to the street were said to be fiber optic and not live power lines.