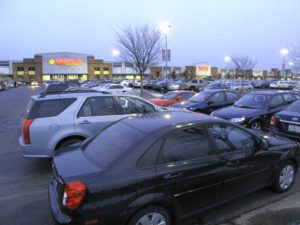 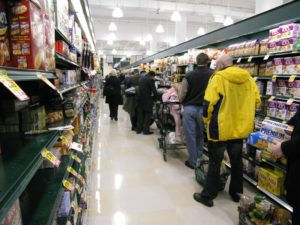 Parking spaces were scarce outside the Shopper’s Food Warehouse at Potomac Yard tonight. At the Harris Teeter in Pentagon City, register lines stretched nearly the length of the store’s isles. Meanwhile on South Fern Street, drivers waiting to get into the Costco parking lot resorted to honking out of frustration with the massive backup.

With forecasters talking up the possibility that this storm will surpass December’s whopper snowfall, locals dutifully headed out en masse to stock up on the essentials. The usual staples — milk, bread, toilet paper — could be found in most carts.

As of 7:30 tonight, the Potomac Yard Shopper’s suffered at least one kind of shortage: shopping carts and baskets. Many shoppers resorted to carrying their groceries by hand — no easy task while waiting in 45 minute checkout lines.

Despite the rancor that prevailed in the traffic jams outside, politeness won the day inside. Lines moved along in an orderly fashion and, at least so far, there was no need to fight for the last roll of Charmin.