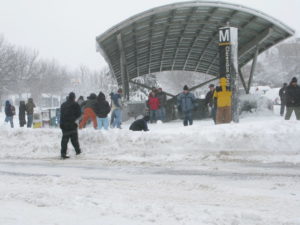 The Clarendon snowball fight proceeded as planned this afternoon. Police, who were called to area for a report of people — shocker — drinking and throwing snowballs, did not interfere with the informal gathering.

Attendance was modest: about two dozen people showed up for the hastily-organized event. Half the crowd lined up on one side of the tiny park, representing points south of the Clarendon Metro. The combatants on the other side represented points north.

Sure, it wasn’t much compared to the 3,000-strong Dupont Circle snowball fight. But at least there weren’t injuries. Or people pelting passing cars with snow. Or (like during December’s U Street snowball fight) guns drawn.