Update at 2:10 p.m. — South Eads Street, which runs parallel to Route 1 from Pentagon City to S. Glebe Road, is not a viable option as an alternate route past 23rd Street. Eads is currently closed between Ft. Scott Drive and S. Glebe Road while crews work to fix another water main break.

Arlington County is warning that only one lane of southbound Jefferson Davis Highway (Rt. 1) in Crystal City will be open in time for tonight’s evening rush hour. The continued lane closures will likely cause major backups for commuters throughout South Arlington.

A series of water main breaks last night caused sections of Route 1 between 23rd St. and 27th St. (near the ramp to Reagan National Airport) to collapse. The breaks have been fixed, but road repair work has gone more slowly than originally anticipated.

Late last night, the county said they were working to reopen southbound Route 1 by the morning rush hour. This morning, engineers said they hoped to have all lanes open by 4:00 p.m. Now, we’re told that one left lane will be open, hopefully by 3:30 p.m.

In otherwise light traffic this afternoon, the closure pushed cars onto side streets, backing up exits and turn lanes off of northbound Jefferson Davis Highway.

Drivers should consider the George Washington Parkway or I-395 as an alternate route tonight, but those already-busy thoroughfares will likely see backups due to increased traffic volume.

South Clark Street, which can be accessed via the I-395 South exit to Boundary Channel Drive, is another option, but it too will likely be backed up.

Commuters coming into Virginia via I-395 can also consider taking Arlington Ridge Road to S. Glebe Road to Route 1 as an alternate route. 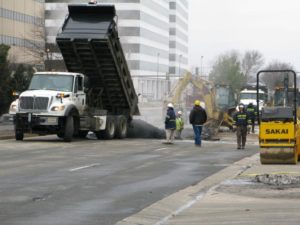 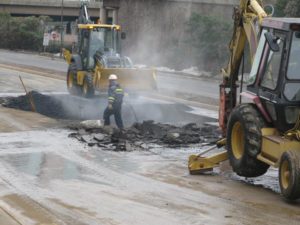 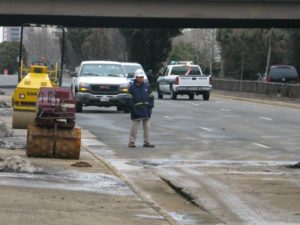 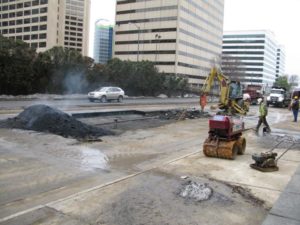