The press conference outside the Pentagon Metro station has revealed new details about tonight’s shooting. Pentagon police chief Richard Keevill said that a lone shooter approached officers manning a checkpoint near an entrance to the station, calmly drew a hand gun, and opened fire.

He “did not say a word,” Keevill said.

Police officers returned fire. Two were hit and suffered wounds that are not thought to be life-threatening.

Witnesses who talked to ARLnow.com said they heard at least a half dozen shots and then saw people ducking and running from the scene.

Minutes after the shooting Pentagon police officers, with guns drawn, frantically moved to cordon off entrances to the Pentagon reservation.

In a chaotic scene, officers ordered pedestrians and vehicles heading towards the Pentagon reservation to turn around while buses, cars and Pentagon employees streamed out onto Army Navy Drive. Meanwhile, Arlington police officers converged on the Pentagon en masse to assist Pentagon police.

The Washington Post and NBC4 have more on the shooting. 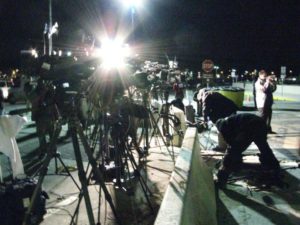 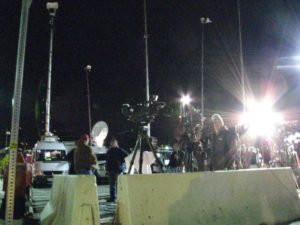