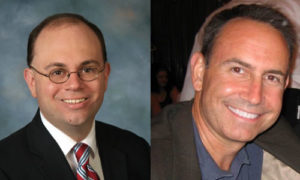 Update at 2:15 p.m. on Tuesday, March 23 — Laurence Socci has endorsed Matthew Berry. “Matthew knows the issues important to the 8th District and has a viable plan for fixing the problems caused by Jim Moran,” Socci said.

Virginia’s eighth congressional district, which includes Arlington, has been a decidedly elusive target for Republicans for nearly two decades.

The first George Bush was president the last time a Republican held the seat. The last three presidential elections have been laughably lopsided in favor of Democrats. President Obama carried the district by a margin of 69 percent to 30 percent over Sen. John McCain, whose own national campaign headquarters was based in Arlington.

Despite the apparent electoral futility, attorney and GOP hopeful Matthew Berry is optimistic about his chances. Last month he cited polling data that showed a close race in a potential match-up with incumbent Rep. Jim Moran. And now, an online poll shows Berry well ahead of his competitor for the GOP nomination, Iraq war veteran Patrick Murray.

The poll, hosted on the blog Red NoVa, shows Berry leading Murray by a margin of 787 votes to 317 votes. Laurence Socci, who withdrew from the race last week, has received 321 votes.

Both Berry and Murray hope to use voter unease about health care reform to their advantage.

On Sunday Berry criticized an executive order issued by President Obama to reassure pro-life Democrats that federal funds would not be used for abortions under the new health care reform bill. “It does nothing to change the fact that the Senate bill will allow people to use federal subsidies to purchase health insurance policies that cover abortion services,” Berry wrote on Facebook.

Murray posted this on his campaign blog on Friday:

Democrats in Congress, led by Nancy Pelosi and Jim Moran, are trying to enact the biggest, most expensive piece of legislation in generations WITHOUT EVEN A VOTE! Did I get off the plane at the wrong stop? Is this Communist China? Are we in Nicaragua? Actually I wonder if even Hugo Chavez would try something this outrageous. This health care bill will wreck the best system of medicine in the World while slathering on trillions of dollars of (more) debt onto our children. What are they thinking?

The primary will be held on June 8th.