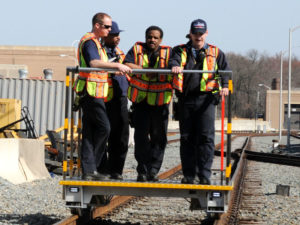 Expect to see lots of police officers, firefighters and emergency vehicles if you use the Rosslyn Metro station Saturday night. Don’t worry, though, it’s only a drill.

Originally scheduled for Feb. 13 but postponed due to snow, the drill will simulate an explosion on a Metrorail train in the tunnel between the Rosslyn and Foggy Bottom stations. Arlington police and firefighters — along with emergency personnel from Metro and other jurisdictions — will test out new Mobile Emergency Response Vehicles (left), the first motorized rescue carts used by a U.S. transit organization.

The exercise will begin at 1:00 a.m. Sunday, but first responders and volunteer “victims” should arrive at the Rosslyn station around 11:00 p.m. Saturday. The exercise is expected to run until 5:00 a.m.