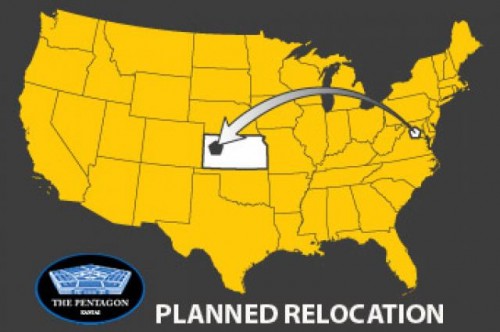 Update at 3:15 p.m. — On our Facebook page, Robert Cannon responds with another possible move: “Richmond announces its planning to relocate Arlington to the Soviet Union..”

It’s looking like a bleak day for south Arlington. First, Greater Greater Washington revealed that the 14th Street Bridge may be closed on nights and weekends to help plug the District’s budget gap. Now, in a press release, the Army said it’s looking to relocate the Pentagon to northwest Kansas.

The move, which is tentatively being planned for this August, will be one of the greatest undertakings ever attempted, according to the Wilbur Q. Johnson, who is a long-time Pentagon employee and who will also oversee the move.

“The move will take place in three primary phases,” said Johnson. “Initially we will use a giant crane to lift the building onto a barge in the Potomac River. From there we will float the barge down the Atlantic Coast and into the Gulf of Mexico. Then, we will sail the Pentagon up the Mississippi River to just south of St. Louis. In the final stage, we will place the building on large flat-bed trucks and drive it the rest of the way.”

It’s a lighthearted joke, of course, but it can also be described as a bit of dark, self-deprecating humor, considering arduous BRAC transition process the military is currently going through.

The transition has major implications for Arlington, as we described last week.

Although the military says they’re on track to relocate BRAC-affected facilities by the September 2011 deadline, we’ve heard from county leaders that the military is having trouble convincing skilled workers to move from Arlington to the far-flung military bases where many agencies are being relocated. The end result may be a major military brain drain over the next few years, we’re told.

That’s not a very funny thought, but we give the Army credit for trying to find humor in it.