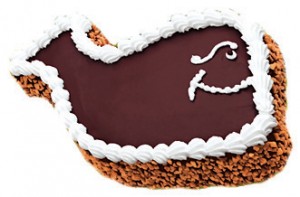 Update on 4/2/10 — Paul and Storm say the event was a “huge success.” Storm successfully ate the entire 12-serving cake, and the duo raised more than $2,750 for the Arlington Food Assistance Center.

Want to see a geek have his cake and eat it, too?

A self-proclaimed “geek musician” who goes by the name of “Storm” will be attempting to eat an entire Carvel “Fudgie the Whale” cake, live on the internet, at 8:00 tonight.

The stunt was originally meant to mark Storm and bandmate Paul reaching 10,000 Twitter followers. Now it has been transformed into a fundraiser.

Paul and Storm are asking their fans for donations, all of which will go to the Arlington Food Assistance Center.

The “Fudgiethon” is being held at online retailer Think Geek’s headquarters in Fairfax. Those who donate will also be enrolled in a chance to win a $100 Think Geek gift certificate.

It may be April Fool’s Day, but this is no joke! Wired has more details.