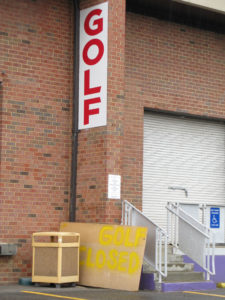 Update on 4/23: A liquidation sale is being held at the Shirlington store.

Washington Golf Center, its sign easily recognizable by I-395 commuters, has abruptly closed. The 30,000 square foot warehouse-style store, founded in 1978, was located at 2625 Shirlington Road. The store’s web site, washingtongolf.com, has apparently been taken down, and the store’s phone number has been disconnected.

There was no immediate explanation for the closure. A commenter at Shirlington Village Blogspot said employees denied the store was going out of business until it closed this weekend.

There’s some evidence, however, that the store was facing financial difficulties.

In January, Acushnet, the manufacturer of the Titleist, FootJoy and Cobra golf equipment brands, sued Washington Golf Centers and its owner, Charles Chay, for breach of contract. Acushnet alleged that Washington Golf Centers owed it nearly $120,000 for merchandise the store had received but had not paid for since April 1, 2009. 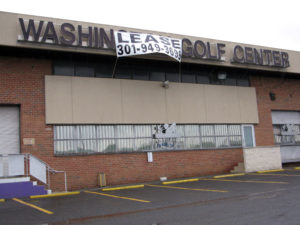 In a press release dated June 23, 2009, the web site promoted a deal where customers buying a set of Callaway irons would be eligible for free upgrades to Callaway’s newest irons in 2010 or 2011. It’s not known whether any customers were able to take advantage of the offer before the store closed.

About two months after the promotion was announced, Washington Golf Centers owner Charles Chay sold his home in Potomac, Md. for $1,250,000, more than a half million dollars less than the asking price, according to an item in Washington Life Magazine. The Acushnet lawsuit lists Chay’s latest address as a condominium in Reston, Va.