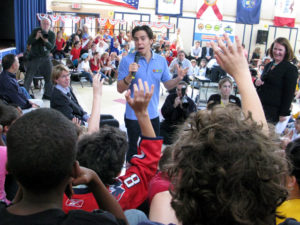 Apolo Anton Ohno, the most decorated Winter Olympian in U.S. history, spoke at Arlington Science Focus Elementary School this morning. He asked the assembled students to say “yes” to a healthy lifestyle and “no” to underage drinking.

Students, giddy with excitement over the Olympic star’s visit, also eagerly and loudly participated in a quiz about the dangers of alcohol.

‘In an interview after the event, Ohno, who usually speaks to middle school students,  said he was impressed with how smart the Arlington Science Focus students were. He also said he was enjoying the opportunity to visit the Washington area. 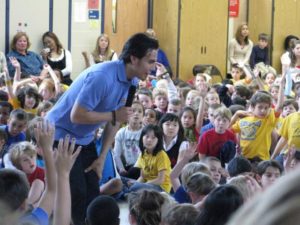 Ohno was coy about his Olympic future, saying only that he’s taking “a break” from short track speed skating. In addition to speaking to students, Ohno is writing a book, just auditioned for a movie, and will be visiting the White House tomorrow. He also recently launched a line of nutrition supplements.

Ohno’s visit was sponsored by The Century Council, a Crystal City-based liquor industry group, as part of its Ask, Listen, Learn initiative.

Before the assembly, Ohno arrived via a black sedan and, with a big smile on his face, greeted school administrators and took a photo with a student under a large banner just outside the school’s entrance.