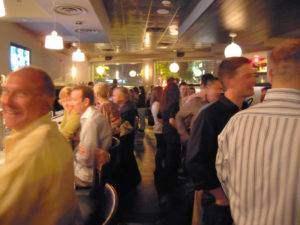 So you got lunch at The Burger Joint and you’re planning to go to P. Brennan’s for happy hour — now all you need to do to complete today’s “official opening” trifecta is dinner at Lyon Hall in Clarendon.

We stopped by the hotly-anticipated European brasserie over the weekend for one of the “soft opening” events and, despite the high expectations, left thoroughly impressed.

The first thing we tried was the mussels. Lyon Hall has two distinct mussel varieties: spring garlic/English peas/fontina/mustard and Hungarian lamb sausage/celeriac-apple-beer broth. We went with the Hungarian lamb and were not disappointed. You’d be hard-pressed to find a tastier plate of mussels anywhere in the D.C. area. And the $14 “large” option was more than enough for two people.

Since it was a late night, we skipped the entrees and went straight for dessert. The chocolate praline cake was uber chocolate-y, with some subtle hazelnut and praline crunch action. It was good, as was the chocolate stout ice cream that came with it. But the best part was the shot of sweet chocolate goodness . We’re not sure what exactly was in it, but “nectar of the gods” seems to be a good description.

We also tried a few selections from Lyon Hall’s sizable but well-curated wine and beer menus. The Hoffbrau Malbock was a bold but accessible brew, and it sold for just $5 on draft. At $9 the Gouldan Cardus Tripel was more expensive but it packed a punch. The favorite beer of the night was the Silly Saison, a Belgian beer that was darker, slightly sweet, and a steal at $6.

We tried one red wine from the menu, a 2008 Domaine De la  Guicharde from Cotes du Rhone, France, which came recommended by the bartender and by the gentleman sitting next to us, who happened to be its local distributor. It was sharp and spicy, and left a bit of sediment in the bottom of the glass. One member of the party loved it, the other was not a fan.

Three points of criticism, which the team behind Lyon Hall is probably already working on:

In all, Lyon Hall is a very, very welcome addition to Arlington’s increasingly vibrant restaurant and nightlife scene. It’s not yet on par with Brasserie Beck, arguably the best Euro-style brasserie D.C. has to offer, but it’s considerably cheaper, has some stuff Beck doesn’t and will likely only get better from here.

One last note: be sure to check out the bathroom. No, seriously. There is no mirror or wall above the sinks, only a wide-open portal into the adjacent bathroom, allowing you to chat awkwardly with members of the opposite sex as you wash your hands. Don’t worry, the toilet area is not visible.

Update on 4/22 — Purse hooks are being installed.