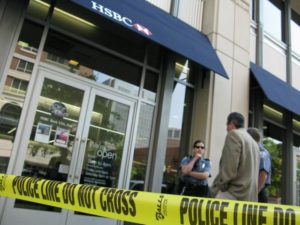 Police are investigating a bank robbery that occurred around 10:20 this morning at the HSBC bank in Ballston (4075 Wilson Blvd), less than a block from the Ballston Common Mall.

Police say the subject is a white male between 5’6″ and 5’8″, about 45 years old, with a slight beard. He was wearing an army green jacket, carpenter-style jeans and a tan safari hat. He was also carrying a black messenger bag.

The suspect entered the bank and demanded cash, police said. He did not display a weapon and no one was injured.

The man was last seen heading eastbound on Wilson Boulevard. Police canvassed local Metro stations and attempted a K-9 track, but could not locate the suspect.

The FBI is on the scene assisting with the investigation. 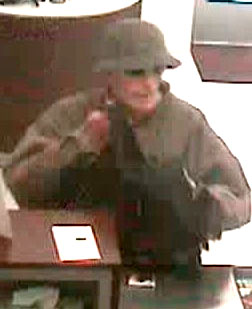 Update at 4:50 p.m. — Police have released a surveillance image of the suspect (right). He was wearing sunglasses at the time of the robbery.

Anybody with information about the case should call the Arlington County Police Department Tip Line at 703-228-4242.